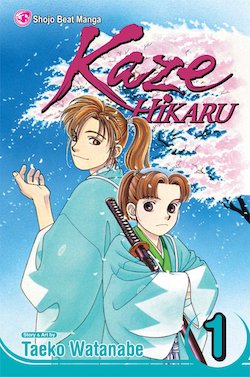 In Manga: Sixty Years of Japanese Comics, author Paul Gravett argues that female mangaka from Riyoko Ikeda to CLAMP have often used “the fluidity of gender boundaries and forbidden love” to “address issues of deep importance to their readers.” Taeko Watanabe is no exception to the rule, employing cross-dressing and shonen-ai elements to tell a story depicting the “pressures and pleasures of individuals living life in their own way and, for better or worse, not always as society expects.”

Kaze Hikaru begins in 1863, a period of immense political and social upheaval in Japan, as the ruling class divided into factions loyal to the emperor (whose seat was in Kyoto), and factions loyal to the shogun (whose government was housed in Edo, or present-day Tokyo). Exacerbating the tension between these groups was the looming question of sakoku, or isolationism, a centuries-old policy that was crumbling in the face of military and economic pressure from the West, an unstable currency, and the dawning realization that certain Western technologies might have a role to play in the modernization of Japan. Taeko Watanabe draws on the events of the Bakumatsu (or late shogunate era, 1863 – 1867) for Kaze Hikaru, incorporating real historical figures into the story and dramatizing some of the major and minor conflicts of the period, from the Ikedaya Affair of 1864 to the Shinsengumi’s ambivalence about adopting rifles and canons into the samurai arsenal.

In the opening pages of Kaze Hikaru, Sei Tominaga, the heroine, lives a sheltered existence under the watchful eye of her father and older brother. Local rabble-rousers accuse the Tominagas of harboring spies at the medical clinic they operate and burn it to the ground, leaving Sei homeless and orphaned. Determined to avenge her family, Sei disguises herself as a boy, adopts the name Kamiya Seizaburo, and joins the Mibu-Roshi, a band of ronin who are fiercely loyal to the Tokugawa Shogunate. (The Mibu-Roshi would come to be known as the Shinsengumi, or “newly chosen corps.” At the height of their power, their ranks numbered around 300, and included a few members who were not born into the samurai caste.) Sei finds a mentor in the slightly older Okita Soji, an accomplished swordsman who acts as a den mother for new recruits. He accidentally discovers Sei’s identity, agreeing to keep her secret if she can demonstrate her worth as bushi, or an honorable warrior.

Watanabe’s art is clean and crisp, conveying enough period detail to firmly establish the setting without overwhelming the eye. A similar attention to facial features and body shapes also informs her nuanced and varied character designs, a godsend for a such a densely populated series. The action sequences are staged simply but effectively, conveying the skill and physical strength necessary to best an opponent in hand-to-hand combat, or suggesting the dangers of a night-time raid. But it’s in the everyday moments that Watanabe’s artistry really shines, as she has a talent for depicting the energy and activity of an urban marketplace, a soliders’ encampment, or a red-light district. We see the Shinsengumi recruits train, squabble, drink, gamble, and abuse their power with innkeepers and merchants, with careful attention paid to the objects they handle, the clothing they wear, and the posture they adopt as they interact with people of higher and lower social status.

Much of the drama — as well as the humor — in Kaze Hikaru stems from Sei’s attempts to fit in with her fellow soldiers by proving her worth as a man — no mean feat, given her small size, feminine appearance, and cultivated upbringing. (This is one of the few cross-dressing stories in which characters routinely ask the question on readers’ minds: “Aren’t you a little too pretty to be a guy?” Not surprisingly, some of the men desire Sei as an exceptionally handsome boy, further confusing our protagonist.) Sei’s greatest challenge, however, is concealing her deep love for Okita as both a mentor and a man. She wants Okita to respect her as a warrior, yet fears that her gender-bending transgression may prevent him from reciprocating her romantic feelings. It’s a classic shojo predicament — think of Lady Oscar and her manservant Andre — that simultaneously reveals Sei’s vulnerability and resolve. Her fierce commitment to the Shinsengumi, however, eventually prevails over her desire to reclaim her feminine identity, as she decides to honor Okita’s wish that she be Seizaburo and not Sei.

When contrasted with other Shojo Beat titles, Kaze Hikaru seems a little old-fashioned. Watanabe tends to favor neat grids and clearly-defined panels over the freer, more expressive layouts used in series like We Were There, Sand Chronicles, and Vampire Knight. The pace, too, is more stately, demanding a higher level of attention from the reader than most Shojo Beat titles; Watanabe’s characters discuss political matters, clan rivalries, and military strategy in considerable detail, giving some scenes the feeling of a Kurosawa movie. Even Sei and Okita’s friendship, rooted as it is in mutual warrior regard, seems out of step with the racier romances depicted in Absolute Boyfriend and B.O.D.Y.: would a school council president or magical girl swoon when she received a customized katana from the object of her affection, even if it was a sincere expression of his respect for her skill and courage?

Yet for all its squareness — or perhaps because of it — Kaze Hikaru remains my all-time favorite shojo manga. What makes Kaze Hikaru so compelling is the way in which Watanabe appropriates a very tired story — samurai seeks revenge in a time of social and political turbulence — and infuses it with a fresh, feminine sensibility. I might call it Satsuma Gishiden for Girls, but I think that downplays Watanabe’s achievement. She’s created an action-filled drama in the vein of The Rose of Versailles or They Were Eleven but transplanted the setting from the relatively safe, romanticized worlds of the French Revolution and outer space to a period in Japanese history in which the male-identified virtues of courage, discipline, and patriotism dominated public discourse. She may not have intended it as a bold political statement, but Watanabe has done something extraordinary: she’s given girls the freedom to project themselves into Japan’s past without gender constraints. American artists looking to connect with female readers would do well to read Kaze Hikaru for inspiration — there’s a great graphic novel to be written about a cross-dressing Minuteman or Union solider, and Sei would make a terrific prototype for its spunky heroine.

Review copies of volumes 17 and 18 provided by VIZ Media, LLC. This is an expanded version of a review that appeared at PopCultureShock on 5/17/07.