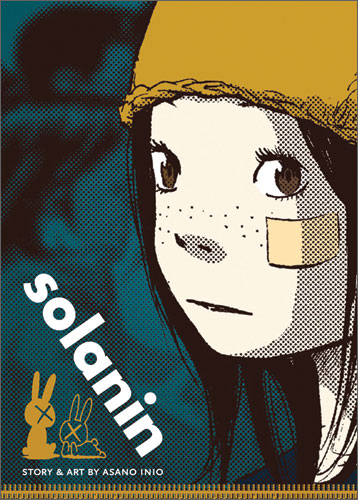 The characters in Solanin are suffering from what I call a “pre-life crisis”—that moment in your twenties when you realize that it’s time to join the world of adult responsibility, but you aren’t quite ready to abandon dreams of indie-rock stardom, literary genius, or artistic greatness. From a dramatic standpoint, the pre-life crisis doesn’t make the best material for a novel, graphic or otherwise, as twenty-something angst can seem trivial when compared with the vicissitudes of middle and old age. Yet Asano Inio almost pulls it off on the strength of his appealing characters and astute observations.

Solanin focuses on a quartet of twenty-somethings, each struggling to shed their collegiate persona and forge adult identities. To be sure, these characters are familiar types, working dead-end jobs, remaining in relationships out of habit, and clinging to unrealistic dreams. Yet Inio never dismisses or romanticizes their pseudo-bohemian aspirations, instead viewing these angstful young adults with a parental mixture of frankness and affection.

Early in the book, for example, a young woman (Meiko) introduces her boyfriend (Naruo) to her mother while trying to conceal the fact they live together. Inio might have milked the scene for its dramatic potential, staging a confrontation between Meiko and her mother. Yet he opts for something quieter and, frankly, truer to life: Meiko’s mother calls her daughter’s bluff, then offers the couple practical advice and encouragement. Instead of being pleased, however, Meiko is dumbfounded and embarrassed, leaving Naruo to stumble alone through an awkward conversation with her mother. What makes this scene work is Inio’s even-handedness; though we feel sympathy for Meiko — she’s genuinely afraid of upsetting her parents — we also realize that she’s disappointed that her decision to move in with Naruo hasn’t caused a scandal, a symptom of her not-quite-adult-relationship with her mother.

Solanin flounders, however, when Inio injects some drama into the proceedings. His big plot twist wouldn’t seem out of place in a deliciously overripe soap opera like NANA, but it feels too contrived for a low-key, slice-of-life story like Solanin; more frustrating still, Inio telegraphs what’s going to happen more than a chapter before that Big, Life-Changing Event, blunting its emotional impact. The book never quite regains its footing, culminating in a concert scene that’s as hokey as anything in The Commitments. Granted, that scene is beautifully executed, using wordless panels to convey the blood, sweat, and tears needed to pull off a live performance, but it feels too pat to be a satisfactory resolution to what is, in essence, a detailed character study.

I also felt ambivalent about the artwork. On the one hand, Inio draws his characters in a refreshingly soft and realistic fashion; as David Welsh noted in his 2008 review, Inio captures the transitional nature of their age through small but important visual cues: gangly limbs, baby fat still evident in their cheeks and tummies, soul patches and other “unpersuasive” attempts to grow beards and mustaches. Inio nails their body language, too, evoking his characters’ emotional and physical awkwardness as they try to forge connections. In this scene, for example, Inio’s characters can barely look one another in the eye, even though it’s evident from their conversation that each has a deep personal investment in music that s/he wants to share with the other:

On the other hand, the backgrounds sometimes look like poorly retouched clip art. Such shortcuts are common in manga, but when done poorly (as they are in a few sequences in Solanin), the resulting images look more like dioramas or collages than organic compositions. In several key scenes, the characters appear to be pasted into the picture frame, floating above their surroundings instead of actually inhabiting them, spoiling the mood and pulling me out of the moment.

Artistic and narrative shortcuts aside, I’d still recommend Solanin. Inio’s book is funny, rueful, and honest, filled with beautifully observed moments and conversations that ring true, even if it occasionally succumbs to Brat Pack cliche.

This is a revised version of a review that appeared at PopCultureShock on 11/19/2008.