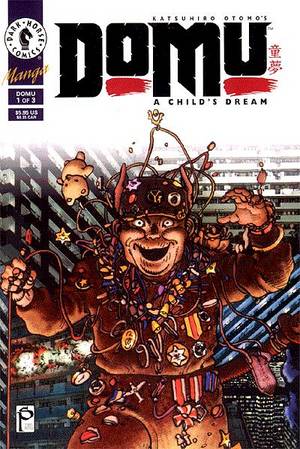 Revisiting AKIRA prompted me to re-read Domu: A Child’s Dream, an earlier work that helped cement Katsuhiro Otomo’s reputation as the leading manga-ka of his generation. Though both series include elements of horror and science fiction, the two are utterly different in approach: AKIRA is sweeping, grand, and allegorical, whereas Domu is compact, a taut psychological thriller that unfolds in a mere 230 pages.

Domu begins like a police procedural: an older detective and his hot-headed young partner arrive at a Tokyo apartment complex to investigate a series of deaths. Though the victims’ histories suggest foul play rather than suicide, the detectives are baffled by the crime scenes: all of the victims have jumped off rooftops or slashed their own throats, with no evidence of anyone watching or aiding them. A few tantalizing clues lead investigators to “Old Cho,” a seemingly benign, senile resident who spends most of his time sitting on a bench and muttering. Inspectors Yamagawa and Tamura can’t connect Cho to the crimes, but Etsuko, a stolid little girl who has just moved into the complex, knows how Cho killed them: telekinesis and hypnotic suggestion.

What follows is an intensely creepy cat-and-mouse game between Etsuko and Cho. Though Cho is nominally an adult, his mind is terrifyingly child-like; he kills his neighbors for their “treasures”: a baseball cap with wings, a fake ruby ring, an umbrella, a stuffed toy. Cho initially regards Etsuko as an impediment to his fun, but when he discovers that Etsuko can also move objects with her mind, he begins testing her strength and sense of morality. Their battle begins in the narrow hallways and dim elevator shafts of Etsuko’s building, but quickly consumes the entire complex as Cho attempts to annihilate Etsuko. 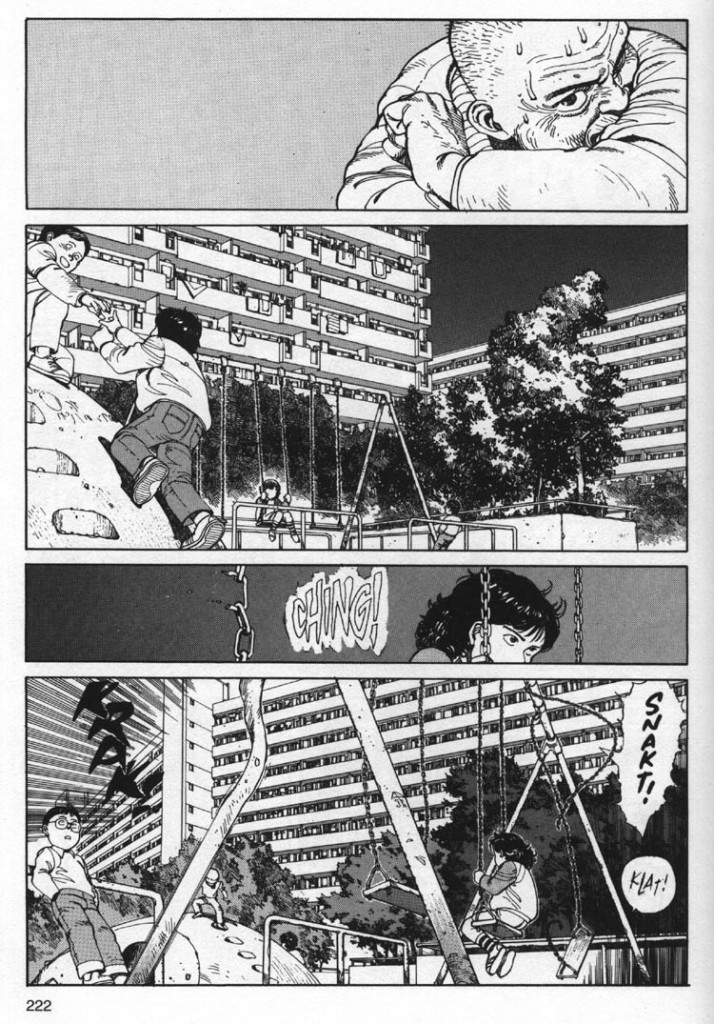 Though I found the artwork for AKIRA a bit dated, a relic of a particular moment in sci-fi history, Domu seemed less mired in the 1980s. The characters are refreshingly realistic in their appearance; Cho actually looks like an eighty-year-old man, with a stooped frame, a deeply-etched face, and liver-spotted hands, while Etsuko’s plump cheeks and slightly awkward proportions seem appropriate for an eight-year-old. Otomo lavishes similar attention on his bit players, too, giving each apartment dweller a distinctive look that speaks volumes about his economic status, age, and fear of being swept up in Yamagawa and Tamura’s murder investigation. Even the apartment complex functions as a kind of character, a sterile collection of high-rise buildings whose imposing exteriors give way to dark, dingy interiors and cramped apartments. As Otomo guides us through its labyrinthine hallways and stairwells, we feel a palpable sense of dread; the complex is filled with the kind of dead ends and blind spots that feature prominently in our worst nightmares.

Domu would be a solid, if not remarkable, thriller on the strength of its artwork alone, but Etsuko’s predicament gives the story an added jolt of energy and terror. She’s the strongest, most adult character in the story, the only one with a clear sense of what’s happening, and the only one powerful enough to stop Cho. Making her plight more compelling is the fact that Etsuko behaves like an eight-year-old who just happens to have a deadly gift, rather than a god-like creature who just happens to be eight years old; she’s small and vulnerable, eager for the comfort of her mother’s arms, but she’s also fiercely moral and incredibly brave in the face of nightmarish events, a child whose natural desire to set things right is cruelly tested by a childish adult.

N.B. Domu has been out of print for several years, though copies are relatively easy to find through eBay and Amazon’s extended seller network. Dark Horse released Domu in several formats, including three slim TPBs and an omnibus edition.