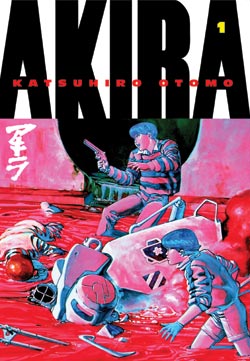 My first exposure to Katsuhiro Otomo came in 1990, when a college boyfriend insisted that we attend a screening of AKIRA at an artsy theater in the Village. I wish I could say that it had been a transforming experience, one that had awakened me to the possibilities of animation in general and Japanese visual storytelling in particular, but, in fact, I found the film tedious, gory, and self-important. Little did I imagine that I’d be reviewing AKIRA nineteen years later, let alone in its original graphic novel format.

I was pleasantly surprised to discover that Otomo’s epic tale works better on the page than it does on the screen, though it’s easy to see why Otomo felt the lengthy motorcycle chases and fight scenes were swell fodder for a movie. Ditto for the setting: what artist wouldn’t want the chance to rebuild a city as complex and ultra-modern as Tokyo from the ground up?

The story, however, demands the more intimate medium of print, as those chases and fights seem urgent and kinetic on the page, an essential tool for drawing the reader into the story, rather than an opportunity for the animators to dazzle audiences with their technical prowess. The story’s setting works better in print as well; the city feels feels more claustrophobic when rendered in black and white than in color. And the story’s length, too, is a factor; the movie compresses over 2,000 pages of material into two hours, trimming some of the manga’s more interesting subplots and secondary characters in order to accommodate the explosions and high-speed chases, and grossly simplifying the relationship between Tetsuo and Kaneda. As in the movie, neither personality is firmly established before Tetsuo begins morphing from juvenile delinquent to god-like psychopath, yet the manga gives each character more room to be, and not just react. As a result, both seem human and vulnerable, more teenage boys than action figures.

The basic plot has held up well. Its paranoid, don’t-trust-the-military vibe seems as resonant in 2009 as it did when the manga was first released in 1982, as does its message about the devastating consequences of WMDs. Watching China prepare for the Beijing Olympics in 2008 — leveling shanty towns, silencing protests — suggested parallels with AKIRA‘s own Olympic subplot, both in the secrecy surrounding the facilities’ construction and in the government’s adamant denial of citizen opposition to the projects.

The artwork hasn’t aged quite as gracefully as the story; it’s the manga equivalent of a mullet, betraying its early eighties roots. Otomo’s backgrounds and weaponry look liked they’ve been traced from The Star Wars Storybook, exuding the same mixture of sterility and rust that was a hallmark of period science fiction, while his characters have thick bodies and pudgy faces, just like the heroes of Tsukasa Hojo’s manga. Yet it’s hard to deny AKIRA‘s visual appeal. Otomo is one of the few artists who can make a chase or an explosion seem like it’s actually happening on the page, thanks to his ability to convey what I call the “geography” of the scene: how big the space is, how high off the ground it is, how far apart the characters are standing. The sound effects are almost superfluous, as Otomo does such a superb job of showing us how the characters move through the space that one can almost hear the whoosh! and vroom! as they fly past.

If you didn’t finish collecting AKIRA when it was still a Dark Horse property, you can round out your set without compromising its appearance on your shelf; the Kodansha edition is virtually identical, save for the logo on the spine. (No, really: it’s the same translation, same trim size, same cover design, and same price as the 2000 version.) And if you haven’t read it yet? Well, now’s your chance to read one of the medium’s greatest sci-fi epics in a nice, oversized package. Recommended.