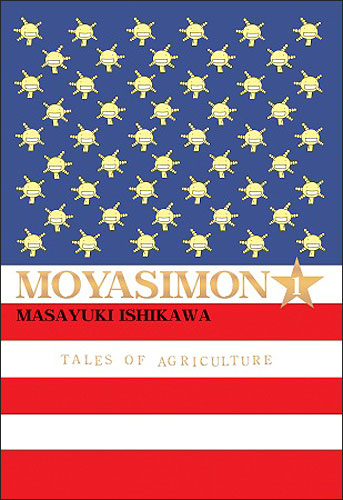 Warning: the Surgeon General has determined that reading Moyasimon: Tales of Agriculture may be hazardous to your health. Individuals who routinely consume large quantities of yogurt, miso, or natto; keep stashes of Purell in their purses and desk drawers; or have an irrational fear of germs or dirt are cautioned against reading Moyasimon. Side effects include disgust, nausea, and a strong desire to wash one’s hands repeatedly. Those with stronger constitutions, however, may find this odd little comedy fun, if a little too dependent on gross-out humor for laughs.

Moyasimon tells the story of Tadayasu, a country boy with an unusual gift: he can see and talk to bacteria. (In other words, he’s the Doctor Doolittle of the microbial world.) At the urging of his grandfather, Tadayasu leaves his small rural village to attend an agricultural college in Tokyo, his best friend Kei in tow. Tadayasu’s abilities bring him to the attention of the eccentric Professor Itsuki, a terraforming expert, and his foul-tempered research assistant Haruka Hasegawa, a graduate student who dresses like a dominatrix. Though they wax poetic about the scientific applications of Tadayasu’s gift, the pair seem more intent on making fermented delicacies — the smellier, the better — than actually conducting experiments. Also vying for Tadayasu’s attention are Misato and Kawahama, two sad-sack sophomores who reach out to him after bacteria compromise one of their numerous get-rich-quick schemes: bootleg sake.

Tadayasu, for his part, finds the attention unsettling. His dearest wish is to have a normal college experience, a desire frustrated by his family’s refusal to send him anywhere but an agricultural school. He also feels ambivalent about his gift. On the one hand, he understands its life-saving potential after thwarting an e-coli outbreak (he overhears the microorganisms rallying around the cry of “Brew ‘n’ kill!”); on the other hand, his microscopic “Spidey sense” makes many everyday activities — shaking hands, eating yogurt, visiting a messy dormitory room — agonizing, as he’s keenly aware of the bacteria’s presence. (In one of the story’s running gags, Tadayasu swoons whenever he visits Misato and Kawahama’s foul bachelor pad, a veritable bacteria playground of half-consumed beverages, dirty dishes, and fetid mattresses.)

The humor is good-natured, though Masayuki Ishikawa indulges his inner ten-year-old’s penchant for gross-out jokes every chance he gets.He repeatedly subjects Tadayasu and Kei to Itsuki’s food fetishes, forcing them to watch Itsuki exhume and eat kiviak (a fermented seal whose belly has been stuffed with birds), or try a piece of hongohoe, a form of stingray sashimi so pungent it makes their eyes water. Ishikawa’s decision to render the bacteria as cute, roly-poly creatures with cheerful faces prevents the story from shading into horror, though it’s awfully hard to shake the image of bacteria frolicking in a bed of natto or around the slovenly Misato’s nostril.

Where Moyasimon really shines is the artwork. Ishikawa’s layouts are detailed yet clear and easy to follow, giving the reader a strong sense of the college and its shabby environs. Ishikawa’s character designs are similarly effective, whether he’s drawing an L. yogurti bacterium or an unscrupulous professor. Take Misato and Kawahama. The two are a classic Mutt-and-Jeff duo: Misato is tall with a scruffy beard, a greasy ponytail, and weasel eyes, while Kawahama is short and round with a dirty face. When we first meet them, we immediately recognize them as a pair of sweating, scheming losers whose big dreams yield little returns. Hasegawa provides another instructive example of how design can play a critical role in establishing character. She’s prickly and aggressive, personality traits amplified by her unusual choice of labwear — knee-high boots with dozens of buckles and sky-high heels, studded belts, and a leather miniskirt — her sharp facial features, and her preferred accessory: a scowl.

Though the art is solid and the characters firmly established, Moyasimon hasn’t quite found its groove yet. Ishikawa can’t make up his mind if he wants us to admire the diversity and tenacity of bacterial life or squirm at the thought of its ubiquity; every educational speech about bacteria’s numerous benefits is punctuated by an icky rim shot. Still, it’s hard to deny the odd appeal of Moyasimon, as Ishikawa takes an all-too-familiar trope — the teen who sees things that other people can’t — and gives it a fresh, idiosyncratic spin.