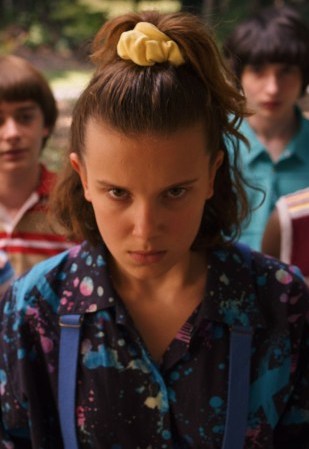 Over the course of three seasons, Stranger Things has devolved from an engaging period piece to a Potemkin village whose neon surfaces, vintage movie posters, garish fashions, and spiral perms have displaced the heart, humor, and horror that made the first two seasons so compelling. The proof lies in the media’s response to the current season, as the New York Times and Vulture have breathlessly cataloged every cereal box and song cue that link Stranger Things to The Goonies and The Neverending Story. In choosing to fetishize the material and pop culture of 1980s, however, the Duffer brothers have neglected the capable team of actors who’ve been selling audiences on the idea that Hawkins is the epicenter of an inter-dimensional catastrophe, lavishing their creative energies instead on recreating that most 80s of artifacts: the mall.

Don’t get me wrong: the idea of a shopping mall concealing a portal to the Upside Down has subversive potential, but the Duffers are too invested in making sure that everything looks right to care whether their story has anything new or meaningful to say about Reagan-era consumer culture. We’re treated to numerous tracking shots of the mall itself, with the camera lovingly documenting the stores, food court, and movie theater as teenagers shop to the sounds of Madonna’s “Material Girl.” Perhaps most tellingly, the characters never really look like they’re at the mall; these scenes look like an 80s sitcom’s idea of what hanging out at the mall was like, right down to the cartoonish portrayal of teenage mating rituals and clique behavior.

Adding insult to injury is the poor writing. Most of the problems lie with the scriptwriters’ decision to lean into the angrier, more compulsive side of Hopper’s personality, with little thought of how his behavior might appear to audiences. Hopper bullies Mike, for example, rather than examining his own feelings about Mike and Eleven dating. These scenes are played for laughs—dads always want to “kill” their daughters’ boyfriends, right?—but the intensity of Hopper’s anger makes these scenes uncomfortable to watch. If anything, his anger is a potent reminder of season two’s biggest flaw: the unexamined way in which Hopper’s desperate, violent attempts to keep Eleven safe crossed a line between loving concern and possessiveness. (Yes, Hopper and Eleven’s relationship was even more egregious than the much-maligned Punk Rockers episode.)

The once poignant dynamic between Joyce and Hopper has also curdled into something sourly antagonistic. Though their first heart-to-heart conversation in Melvald’s is moving, conveying both Hopper’s insecurities and Joyce’s ambivalence towards Hopper as a romantic prospect, the relationship goes downhill from there. Hopper behaves like a boor when Joyce stands him up for a dinner date, even though Hopper had repeatedly stressed that he wasn’t asking her out. That scene might have played better if we were encouraged to see Hopper as entitled or insensitive, but instead Joyce becomes the villain in this scenario, a scatterbrain who’s so obsessed with proving that something awful is happening in Hawkins that she’d rather chat about magnets with a high school science teacher than split a bottle of Chianti with Hopper. The script then puts Hopper and Joyce in a strenuously unfunny holding pattern as they bicker in a manner that’s supposed to show how much they’re secretly attracted to one another. Ryder, whose fierce intensity was an asset in seasons one and two, is particularly unsuited to this kind of banter, overselling every comeback with too much mugging. Worse still, the dialogue is so flat that it barely registers as amusing, let alone flirtatious.

Perhaps the biggest failing of season three, however, are the monsters. Though there’s a genuine ick factor to the Mind Flayer’s new form, it looks too much like raspberry Jello-O to be the stuff of nightmares; only a gruesome scene in which hordes of rats spontaneously explode registers as horrific. Other potentially scary moments–Nancy confronting the Mind Flayer in a hospital ward, Billy being dragged into the Flayer’s den–are too self-consciously derivative of Alien to make much of impression on viewers familiar with the Duffers’ favorite pop-cultural touchstones. As a result, season three lacks a single scene that’s as unnerving as Barb’s disappearance, or as harrowing as Eleven’s visits to the astral plane, two of the defining moments of season one.

There are a few bright spots, thanks to the Duffers’ generous treatment of the supporting characters. Steve and Robin’s friendship, forged through insults and amateur sleuthing, adds some screwball zest to the proceedings, demonstrating Joe Keery and Maya Hawkins’ potential as romantic comedy leads; their scenes crackle with the kind of wit and energy that’s sorely missing from Hopper and Joyce’s ill-fated courtship. Noah Schapp continues to impress as Will, bringing soulful presence to a character who’s often pushed to the margins of his own story. As his friends pair off in season three, Schapp makes us feel Will’s contempt for Mike, Dustin, and Lucas, who’ve traded Dungeons & Dragons for trips to the mall and awkward dates; Schapp’s facial and body language capture his frustration and shame at being relegated to the status of uncool friend.

Alas, little else in season three of Stranger Things feels as honest or scary as Will’s dilemma. Most of season three registers as 80s fanservice with its on-the-nose needle drops and acid-washed fashion, with little sense of what it was actually like to be alive in the Reagan years. Unless the writing team figures out how to bring back the suspense and humor that made seasons one and two so irresistible, Stranger Things will continue to feel more like Goonies cosplay than a horror story that just happens to take place in the 1980s. Not recommended.

Seasons one through three of Stranger Things can be streamed on Netflix.