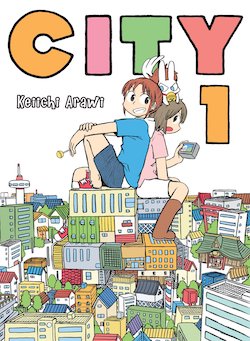 CITY, Keiichi Arawi’s latest series, charts the misadventures of Midori, a feckless undergrad who’s behind on the rent, in debt to her roommate, and surrounded by “not-quite-ordinary people.” In a last-ditch effort to stay in her apartment, she hatches several get-rich schemes — betting on horses, entering a photography contest — all of which backfire in spectacular fashion. That premise sounded ripe with comic potential, so I decided to pick up a copy of volume one.

I’ll be honest: I had a hard time reviewing CITY, a manga that seems to be tickling everyone else’s funny bone but mine. Though I could appreciate the skill and imagination behind Keiichi Arawi’s work, I found CITY too frantic to be amusing, thought-provoking, or interesting. My frustration boiled down to two basic observations about Arawi’s methods — first, his unwavering belief that repeating gags is a surefire strategy for laughs, and second, his unwavering belief that certain types of jokes subvert convention when, in fact, they’re just as cliche as the conventions they’re spoofing. Nowhere are those two tendencies more pronounced than in his depiction of Midori’s landlady, a feisty old broad who goes to violent lengths to collect the rent. A karate-chopping grandma sounds hilarious in the abstract, but you’ve seen this gag done better elsewhere, most spectacularly in Kung Fu Hustle, where the regal and ridiculous Yuen Qi steals the show from under Stephen Chow’s nose  — something that can’t be said of Midori’s landlady, whose shouting and punching barely distinguishes her from her equally batshit neighbors.

It’s only in the quieter interludes, when the focus shifts from Midori to her neighbors that Arawi’s flair for the absurd manifests itself. In “Officer,” for example, a neighborhood patrolman finds himself under citizen’s arrest for a theft he was asked to investigate. The officer’s placid expression and deadpan delivery contrast sharply with the physical and emotional indignities of his job, his beatific expression unbroken by the ordeal of being hog-tied by an overzealous mob. Another modestly amusing interlude — “Wako Izumi” — focuses on a control freak who’s distraught by the loss of a restaurant point card. Like the officer, Wako proves an unreliable narrator, her impulsive, weird behavior contradicting the Sgt. Friday-esque tone of her internal monologue. These moments of surrealism aren’t funny, exactly, but they at least feel original, something that can’t be said of the tired slapstick jokes and strenuously unpleasant main characters.

Verdict: Your mileage will vary. See my colleague Sean Gaffney’s review for a different perspective on CITY.