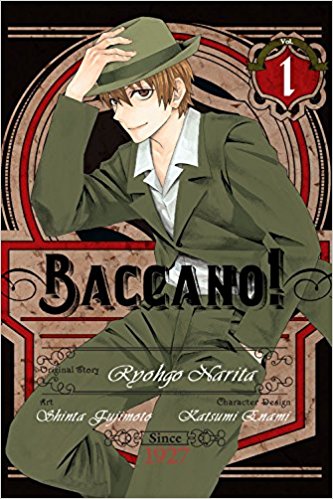 There are two things you need to know before you read this review. First, I’m a ride-or-die Godfather II fan, the kind of person who’s obsessively watched Robert DeNiro’s performance as the young Don Corleone more times than I can count. Second, I am not a Light Novel Person, despite my repeated efforts to embrace the format.

I disclose this information because Baccano! is a manga adaptation of a light novel series set in Prohibition-era New York, where rival families — one from Sicily, one from Naples — run guns, booze, and card games. That meant there was a 50% chance I’d love this series, since the premise screams “Manga Godfather!”, and a 50% chance I’d hate Baccano!, since the manga was conceived as a tie-in product for the novels’ hardcore fans. What I didn’t expect, however, was just how inept the adaptation would be; I assumed that my objections would be to content or characterization, not a sloppy, hole-filled (holy?) narrative. Shinta Fujimoto’s storytelling, however, is serviceable at best and amateurish at worst, cramming too many events and characters into volume one. The result is a jumbled mess of introductions, reunions, and exposition masquerading as conversation; I spent as much time backtracking two or three pages as I did moving forward, relying on the Wikipedia to demystify poorly explained plot twists, not the least of which is that some characters are immortal.

Superficially, the artwork seems more polished than the narrative, but a close examination reveals just how perfunctory Fujimoto and Katsumi Enami’s character designs really are. The Martillos and Gandors are so blandly drawn that nothing about them reveals about the characters’ ethnicity, social standing, or profession, let alone the time period in which the story unfolds. The same is true for the physical environment. A few establishing shots depict fire escapes and brick buildings, but Fujimoto seldom provides much in the way of period detail, nor does he convey just how densely settled Little Italy was in the 1920s.

His lazy world-building is most evident in chapters two and three, when Firo Prochainezo, a foot soldier in the Martillo Camorra, tracks an assassin through the tumult of the San Gennaro Festival in much the same fashion as Don Corleone pursues Don Fanucci in The Godfather II. In Coppola’s hands, these scenes are bursting with the activity of brass bands and puppeteers re-enacting San Gennaro’s martyrdom, a vibrant pageant of Sicilian Catholic tradition. In Fujimoto’s version, however, the festival looks about as exciting as a high school pep band rehearsal, with a few token shots of musicians and festival goers. Worse still, Fujimoto has difficulty making these scenes an organic part of the story, inserting them into a potentially suspenseful cat-and-mouse game that unfolds in the alleyways of … well, it’s supposed to be Little Italy, but honestly, it looks as much like Sesame Street as any real city.

About the best I can say for Baccano! is that it clocks in at a mere 160 pages; anything longer would seem as eternal as the characters themselves. I know I’m not the intended audience for this manga, but the series’ die-hard fans — those who read the novels and watched the anime — surely deserve a more artful tie-in than this disastro totale.