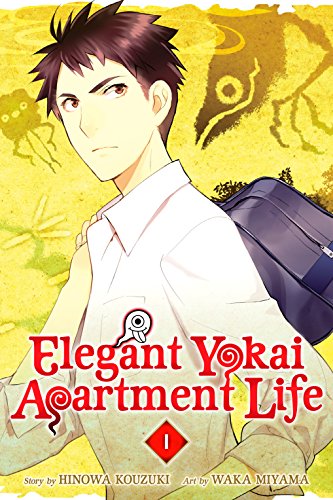 Elegant Yokai Apartment Life suffers from multiple personality disorder, lurching awkwardly from one situation to the next without comfortably settling into one storytelling mode long enough for the reader to decide if it’s a sitcom, a soap opera, or a horror show.

In fairness to creators Hinowa Kouzuki and Waka Miyama, few stories purely embody a single genre; the labels that the publishing and entertainment industries have coined — rom-com, dramedy — give ample proof that hybridization is a common strategy for enlivening familar plots. For such hybrid forms to work, however, the tonal shifts must be intrinsic to the story, arising naturally from the interactions between the characters and their environment. Elegant Yokai‘s narrative swerves, however, feel more like a desperate attempt to appeal to as many different constituencies as possible: there’s fanservice for guys (a female ghost who wears only panties and a well-placed towel) and girls (a hot onmyoji with a ponytail and a silver fox with an eye patch), yokai drawn from folklore and urban myth, a potential love interest for the hero, a raft of comic-relief characters who get brief turns in the spotlight, a subplot borrowed from a 1983 Afterschool Special, and tragic backstories for several characters just in case the idea of a “ghostly boarding house” doesn’t tickle your funny bone.

The most frustrating part of this narrative abundance is that so much of it feels… extra. Any one of these elements could be excised from the story without fundamentally changing the premise, making room for more character development. That point is crucial: Elegant Yokai‘s lead is less a person than a reader surrogate, walking from one situation to another in a state of mild befuddlement about his supernatural neighbors. Author Hinowa Kouzuki has saddled Inaba with motivations that explain how he ended up rooming with yokai, but hasn’t actually given him any discernible personality traits. Kouzuki and Miyama’s few attempts to flesh out Inaba’s character are clumsy and, frankly, illogical: what well-adjusted person marks his middle school graduation by fighting his BFF in an abandoned lot because he’s “always wanted to do that”? (Shouldn’t Inaba quote one of the rules of Fight Club or something?)

The artwork suffers from a similarly overdetermined quality. The human characters are less drawn than assembled from bits and pieces of other artists’ work — a dash of CLAMP here, a bit of Yuu Watase there — while the yokai have been shamelessly copied from Rumiko Takahashi and Hayao Miyazaki’s oeuvre. Making deliberate allusions to other artists’ work is, of course, a time-honored tradition, but here, these nods feel less like tribute and more like theft; readers tempted to compare Miyama’s art with Miyazaki’s are bound to find hers a poor substitute.

It’s only in the final chapter of volume one that we get a glimpse of what Elegant Yokai might have been. The story trains the spotlight on Inaba’s fellow apartment dwellers Kuga and Shiro, a boy and his dog who were murdered by Kuga’s mother. Once a month, Kuga’s mother — also a ghost — shows up at the apartment building to reclaim her son. Over time, however, her human form has deteriorated and memories have faded, reducing her to a pitiful demonic state, more scribble monster than angry wraith. The frankness with which Kouzuki and Miyama depict her crime prevents these scenes from descending into bathos; these moments are the only ones that elicit an authentic emotional response from the reader, not least because Kuga and Shiro’s predicament has a demonstrable effect on the other characters. Too bad the rest of volume one is such a frantic, disjointed mess.