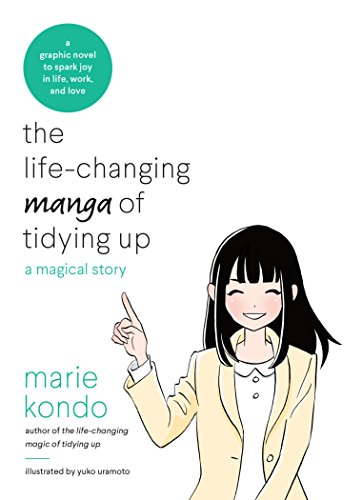 First published in 2011, Marie Kondo’s The Life-Changing Magic of Tidying Up: The Japanese Art of Decluttering and Organizing became an international phenomenon, selling over seven million copies in 40 languages. The book inspired a two-part television drama, a follow-up called Spark Joy: An Illustrated Master Class on the Art of Tidying Up, and a veritable tsunami of related products and experiences including apps, seminars, and journals for documenting “what brings you joy every day.” In an effort to bring her message to even more readers, Kondo recently collaborated with artist Yuko Uramoto (Kanojo no Curve, Hanayome Miman) to create the most quintessentially Japanese tie-in product of all: a manga version of The Life-Changing Magic of Tidying Up.

Uramoto’s strategy for transforming a how-to book into a manga is simple: she turns the decluttering process into a narrative, using a fictional character, Chiaki, to lead us through the process step-by-step. When we first meet Chiaki, she’s a single, 29-year-old career woman living in a filthy apartment strewn with clothing, papers, sports equipment, dirty dishes, and bric-a-brac of every description. After her handsome next-door neighbor chastises her for leaving garbage on the balcony, Chiaki vows to change her life by calling — who else? — Marie Kondo herself.

Over the next nine chapters, Kondo gently but firmly helps Chiaki get control of her apartment. Before they tackle the clutter, however, Kondo asks Chiaki, “What kind of life would you like to live here?” Chiaki is taken aback by the question, but this visualization exercise is a cornerstone of the KonMari system, encouraging the client to think about decluttering not as a one-time effort but a first step towards living a more joyful, less harried life. Kondo then shepherds Chiaki through the discard process, helping Chiaki systematically assess all of her belongings, starting with the three biggest sources of clutter — clothing, books, and paper — before moving on to komono (odds and ends) and sentimental objects. Guiding all of Chiaki’s decision-making are two questions: “Does this item give me joy?” and “Am I using this item right now?”

As an adaptation, The Life-Changing Manga largely succeeds in teaching the KonMari method without recourse to talking-head panels. The graphic format allows Uramoto to show the reader how to store things, arrange a closet, and fold items into small rectangles that can stand upright in a drawer — one of Kondo’s signature organizational techniques. As befits a manga about decluttering, the artwork is both simple and cute. Though the character designs lack strong personality, they’re winsome enough to carry to the story and convey the emotional impact of using the KonMari method; by the story’s end, we appreciate just how elated Chiaki feels after liberating herself from the Tyranny of Stuff.

The manga’s most glaring fault lies not with the adaptation but the source material. Kondo frames de-cluttering as a one-size-fits-all remedy for life’s biggest problems, a point reinforced by the fictional Kondo’s conversations with Chiaki. As we learn in chapter two, Chiaki has a bad habit of falling for guys with hobbies, buying snowboards and tea sets so that she can get to know them better. Every time she breaks up with someone, however, she can’t bear to get rid of her newly acquired gear, developing elaborate rationales for keeping it. Kondo counsels Chiaki to get rid of these items, telling her, “If you hang onto things because you can’t forget an old love, you’ll never find a new love.”

There’s unquestionable value in Kondo’s insight that clutter accumulates when we’re not fully invested in the present, yet her philosophy is too reductive. A messy apartment might be a sign that you need to reconsider your approach to dating, but it could also be symptomatic of working such long hours that cleaning and organizing feel like a second, unpaid job. There’s also a whiff of sexism in the way Chiaki is depicted as a failure for being disorganized, messy, and single; it’s hard to imagine a salaryman character attributing his romantic shortcomings to a sinkful of dirty coffee cups or a jumbled closet, or viewing the KonMari method as the key to living a better, more fulfilling life.

That lingering note of sexism makes it hard for me to unequivocally endorse The Life-Changing Manga of Tidying Up. I think Kondo’s basic advice is sound, but I can’t quite shake the feeling that perfectly folded undies are being held up as a badge of true womanhood, rather than an artful way to organize your drawers.

THE LIFE-CHANGING MANGA OF TIDYING UP: A MAGICAL STORY • BY MARIE KONDO, ILLUSTRATED BY YUKO URAMOTO • TRANSLATED BY CATHY HIRANO • TEN SPEED PRESS • NO RATING • 192 pp.

9 thoughts on “The Life-Changing Manga of Tidying Up: A Magical Story”