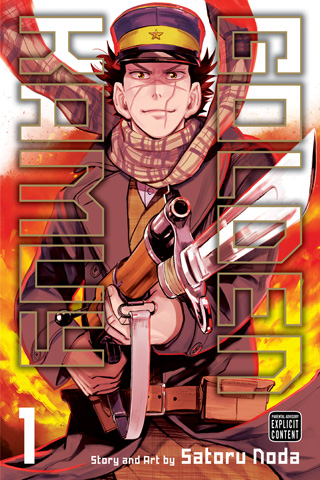 If you have a strong constitution and a healthy appetite for adventure, you’ll cotton to Golden Kamuy, a solid, if sometimes workmanlike, manga that reads like a mash-up of The Revenant and The Treasure of the Sierra Madre. Set on the Hokkaido frontier in 1905, Golden Kamuy tells the story of Saichi “Immortal” Sugimoto, a battle-scarred veteran of the Russo-Japanese War who’s desperately trying to raise money for a fallen comrade’s widow. After a chance encounter with a chatty ex-con, Sugimoto learns about a hidden treasure worth millions. Sugimoto then sets off to find the gold — no mean feat, as the map pinpointing its location has been tattooed onto the backs of a dozen prisoners, each with his own design on the loot.

Sugimoto faces another major obstacle to success: the harsh Hokkaido winter. A second fortuitous meeting — this time with an Ainu teenager — furnishes Sugimoto with a expert guide to wilderness survival. Like Sugimoto, Asirpa is searching for the treasure, albeit for a different reason: the men in her village died to prevent it from falling into Japanese hands. Though Asirpa slots into the common and often stereotyped role of “native sidekick,” she’s not just a repository of useful skills and earthy wisdom; she’s an individual with the courage to challenge Sugimoto when his determination shades into ruthlessness, and the tenacity to fight her way out of difficult situations by improvising traps, creating smokescreens, and throwing punches. Oh, and she brings down a hungry bear with a single well-placed arrow. She’s a baller, and one of the best reasons to read Golden Kamuy.

As skillful as Noda may be in establishing his setting and characters, the script suffers from frequent — if brief — patches of clumsy dialogue and narration. One of the most egregious examples occurs in chapter four, when Sugimoto goes mano-a-mano with another soldier. The artwork makes it plain that Sugimoto’s opponent gets the best of him by grabbing and disabling his rifle, but Noda interrupts the scene to inform us, “The moment they moved away from each other, the man depressed the bolt stop and pulled out the bolt, rendering Sugimoto’s rifle useless.” Such intrusions are all the more puzzling because Noda’s draftsmanship is crisp, stylish, and easy to parse; even when Noda indulges in an extreme close-up or odd camera angle, we’re never in doubt about what’s happening.

Speaking of Noda’s artwork, he draws guts, wounds, and scars with a surgeon’s precision, offering a nightmarish vision of bodies torn apart by bullets — and bears. Though a few sequences skirt the line between dramatic necessity and cinematic flourish, these horrific images play an essential role in conveying the brutality of frontier experience and the horrors of trench warfare. Anything tamer would rob the story of its urgency, and reduce Sugimoto to a simple opportunist, rather than a fierce survivor who’s cheated death dozens of times.

So if you can soldier past the tin-eared dialogue and frequent arterial spray, you’ll be rewarded with a briskly paced thriller that transports you to another time and place, capturing the Hokkaido wilderness in all its squalor, beauty, and promise. Recommended.

A copy of volume one was provided by the publisher. Golden Kamuy will be available on June 20, 2017.