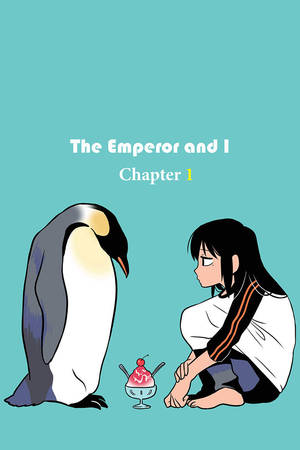 The Emperor and I reads like a Sunday comic strip: it has a faintly absurd premise that’s easy to grasp, a small cast of characters, and a well-honed repertoire of jokes that it trots out with clockwork precision.

The story begins with Kaho, an ordinary teenage girl, discovering an extraordinary thing in the refrigerator: a penguin. Without a second thought, she coaxes him out of the crisper drawer, feeds him a snack, and persuades her mom to let him stay. Emperor turns out to be less a pet than a weird houseguest, however, doggedly pursuing penguin behaviors — carrying eggs on his feet, sliding across the floor on his belly — while assiduously ignoring his human companions.

What gives the series its odd comic energy is the artist’s fierce commitment to depicting Emperor as a wild animal. Emperor doesn’t talk or have a winsome face with big, soulful eyes; he’s a silent, hulking presence who molts and sleeps standing up. The gulf between Emperor and his human hosts is further underscored by the full-color artwork. As Mato draws him, Emperor looks like an illustration from a biology textbook, with every patch of orange and feather rendered in meticulous detail. By contrast, Kaho and her family look like stock characters from a Shonen Sunday manga; you’d be forgiven for thinking they were part of Kagome Higurashi’s extended clan. Color also enables Mato to conceal Emperor in plain sight so that he’s visible to the reader but plausibly hidden from the characters, a gimmick that proves essential to one of the series’ better running gags: Emperor’s talent for disappearing inside Kaho’s very small house. (That’s no small feat, considering he stands four feet tall and reeks of mackerel.)

Perhaps the best thing about The Emperor and I is that it wears its conceit lightly. We learn a lot about penguin behavior and anatomy over the course of the series, but other critical details are left to the readers’ imagination. Although Kaho and her family acknowledge the bizarreness of their situation — remember, they found a penguin in the crisper drawer — none of them seem particularly bothered by it, or curious to discover how Emperor arrived there. By keeping the focus on Emperor’s natural avian behaviors, Mato mines a richer comic vein of material, highlighting the incongruity between the setting and Emperor’s attempts to carry on as if he were still living in Antarctica.

Like any Sunday strip, The Emperor and I is best in small doses, as the “Where’s Emperor?” jokes grow tiresome when read in rapid succession. Consumed in weekly doses of three to nine pages, however, The Emperor and I works well; the routine jokes have a pleasantly familiar ring that brings the genuinely novel gags into sharper relief. You won’t forget the silent encounter between Emperor and a neighborhood cat, or Kaho’s frantic efforts to turn her bathtub into a salt-water pool, even if the comic bits that surround these sequences are pat.

How to read The Emperor and I: VIZ is serializing this manga on its website, making a new chapter available every week. Access is free, though expect to see at least one or two pop-up ads for VIZ’s digital edition of Weekly Shonen Jump.

THE EMPEROR AND I • BY MATO • VIZ MEDIA • RATING: ALL AGES

7 thoughts on “The Emperor and I”