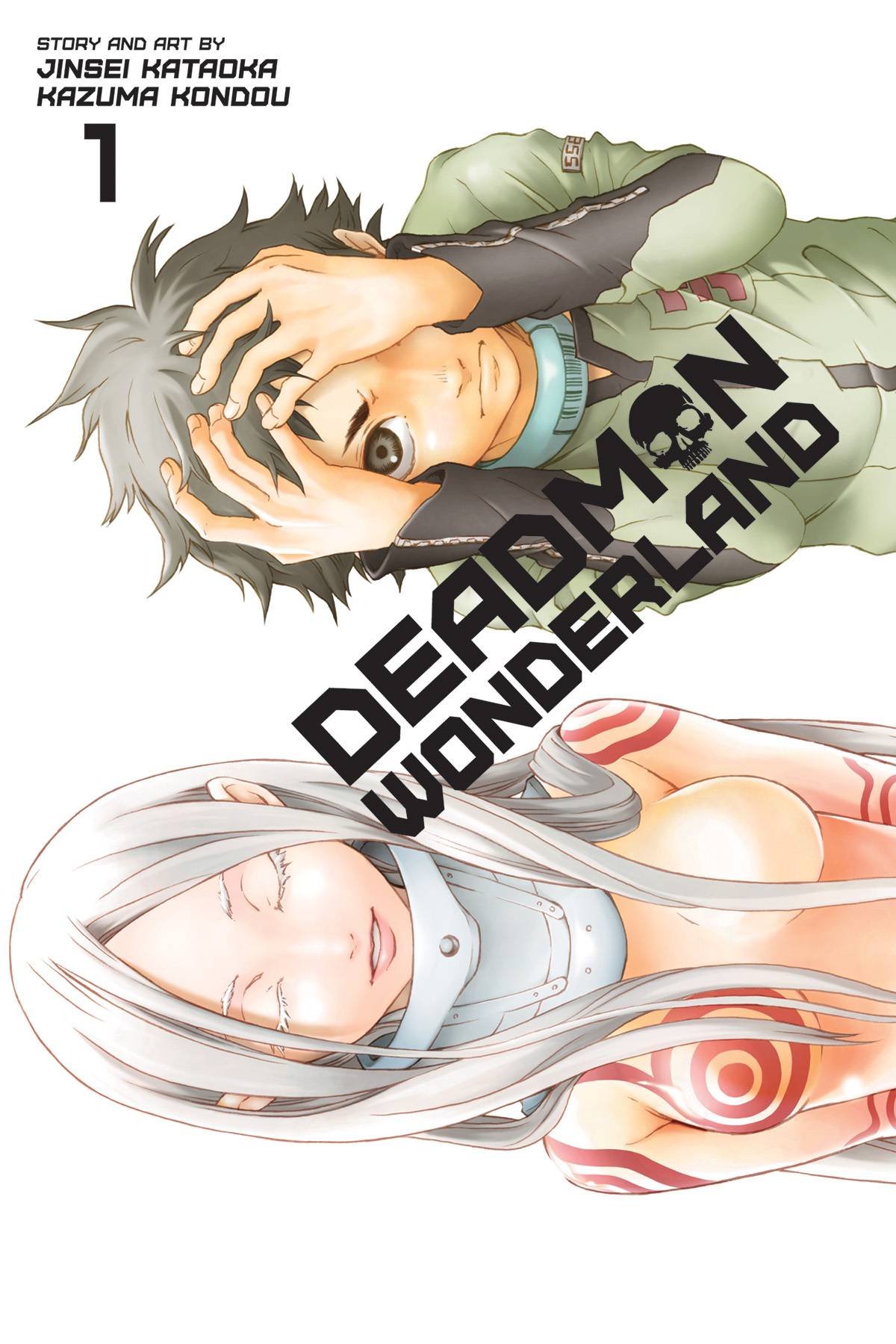 The November release of Jinsei Kataoka and Tomohiro Maekawa’s Livingstone provided me a nifty excuse to try Deadman Wonderland, an earlier series written and illustrated by Katoaka. Fans of Deadman Wonderland may know its complex licensing history here in the US: Tokyopop was its first publisher, releasing five volumes before going bankrupt in 2011. VIZ acquired the series in 2013, and is now just two volumes shy of the series’ grand finale, which arrives in February 2016.

In the not-so-distant future, visitors flock to Deadman Wonderland, a prison-cum-theme park in Tokyo Bay where inmates fight to the death in front of paying crowds. Our guide to this Roman circus is newly minted prisoner Ganta Igarashi, an ordinary fourteen-year-old who’s been wrongfully convicted of murdering his classmates. Ganta’s fundamental decency is challenged at every turn; try as he might to cling to his humanity and clear his name, the prison’s arbitrary rules and roving gangs make it hard to be principled.

From my thumbnail description, you might conclude that Deadman Wonderland was cobbled together from parts of Judge Dredd, Rollerball, and Escape from New York–and you wouldn’t be wrong. What prevents Deadman Wonderland from reading like Rollerball 2: The Revenge is imaginative artwork. Jinsei Kataoka and Kazuma Kondou have created a Bizarro World Disneyland with rides, concessions, grinning animal mascots, and attractions like the Happy Dog Run, a lethal obstacle course featuring swinging blades and spike-filled pits. The characters who inhabit this landscape are a motley crew: though some telegraph their bad-guy status with tattoos and goofy haircuts, there are enough ordinary-looking prisoners that it’s impossible to judge who’s trustworthy. That uncertainty creates a strong undercurrent of tension in every scene, making Ganta’s routine activities–a conversation in the bathroom, a trip to the cafeteria–as fraught with peril as an actual contest.

The manga’s other great strength is pacing. Kataoka and Kondou resist the temptation to dole out too much information in the first volume; we’re never more than a clue or two ahead of Ganta, though perceptive readers may finish volume one with some notion of the prison’s true purpose. The authors’ expert timing also prevents us from dwelling on the story’s most shopworn elements, instead focusing our attention on how Ganta responds to new characters and new challenges.

All of which is to say: Deadman Wonderland is more fun than it has any right to be, considering the high body count and recycled plot points. Count me in for the next twelve volumes!

The verdict: Great art, smart pacing, and an appealing lead character make Deadman Wonderland a winner. (A note to parents, teachers, and librarians: this manga’s rating is justified.)

Livingstone is a handsomely illustrated bore, the kind of manga in which the writer has dressed up a simple concept with a profusion of fussy details that don’t add depth or interest to the story. The title refers to human souls–or, more accurately, the rock-like form that human souls take after a person dies. Sakurai and Amano, the manga’s protagonists, work together to harvest livingstones, thus ensuring that a soul is properly passed from one person to the next. If a person dies before his appointed time, however, his soul curdles into a gooey blob of bad juju.

The manga has the rhythm of a cop show: in each chapter, Sakurai and Amano solve or prevent one unscheduled death, usually by negotiating with someone who’s planning to kill himself. Livingstone‘s intense fixation on suicide is off-putting; none of the would-be victims are particularly sympathetic, and Sakurai and Amano’s ministrations are so tone-deaf that it’s hard to know what message author Tomohiro Maekawa is hoping to impart to readers. Sakurai and Amano’s antagonistic bickering is supposed to inject a note of levity into the proceedings, I think, but the timing of the jokes and the staleness of the characterizations do little to offset the dour tone. By the end of volume one, I found myself feeling bummed out and irritated–never a good sign for a series that’s exploring a subject as serious as death.

The verdict: Nice art, lousy script; I liked this story better when it was called The Kurosagi Corpse Delivery Service.

These reviews originally appeared at MangaBlog on November 27, 2015.