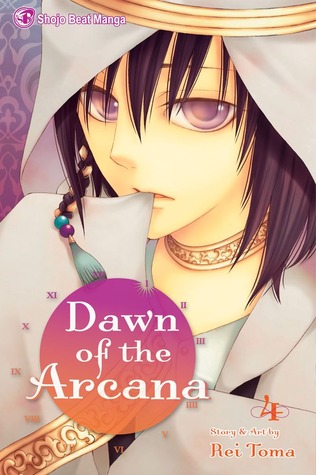 On the surface, Dawn of the Arcana looks like a Harlequin romance. Its flame-haired heroine is feisty and impetuous, torn between her feelings for the man who raised her and the man she was forced to marry. Both men are keen to “own” her — their word, not mine — and are willing to go to ridiculous extremes to prove their devotion, even setting aside their differences to honor her requests. And true to Harlequin form, the heroine frequently struggles to reconcile the circumstances of her marriage and her growing feelings for her jailer-husband.

Peer beneath its romance-novel trappings, however, and it quickly becomes clear that manga-ka Rei Toma is actually writing a pretty nifty fantasy-adventure as well, one with interesting moral dilemmas, parallels with contemporary geopolitics, and multi-layered characters whose behavior frequently deviates from the Harlequin playbook.

In volume three, for example, Nakaba’s mother-in-law attempts to dye her hair black, lest visiting dignitaries realize that the new Belquat princess hails from Senan. Toma might have used this scene to provide Caesar an opportunity to publicly declare his feelings for Nakaba, or demonstrate Nakaba’s ability to endure hazing with noble forbearance. Instead, Toma transforms this act of fairy-tale cruelty into a moment of self-actualization: Nakaba seizes a sword and defiantly gives herself a fabulous pixie cut — er, short, boyish locks — denying the queen the satisfaction of humiliating her in front of the royal family.

That act resonates throughout the next three volumes, as Nakaba sheds her girlish braid and girlish indignation in favor of a stronger, more active role in defeating Belquat’s royal family. Though Nakaba’s new ‘do leads to some predictable exchanges about “looking like a boy,” both Loki and Caesar admire her determination: red hair symbolizes more than just her country of origin, but also the struggles that helped define her as a person.

As appealing as such scenes may be, they highlight the series’ main drawback: the artwork is too plain and spare for a story with such vivid characters. Though the principal characters’ costumes are rendered in considerable detail, the supporting cast resemble Renfair extras, with faintly old-timey clothing and long tresses. Worse still are the backgrounds: with their perfect right angles and unvaried lines, they look like stills from an ancient Nintendo game, rather than a representation of a specific time and place. That sterility isn’t a deal-breaker, but it does reinforce the impression that Toma hasn’t quite developed the artistic chops to fully realize her vision.

Despite its artistic shortcomings, Dawn of the Arcana remains an appealing mixture of fantasy and romance, offering just enough sword fights, scenes of female empowerment, and emotional entanglements to appeal to fans of both genres.