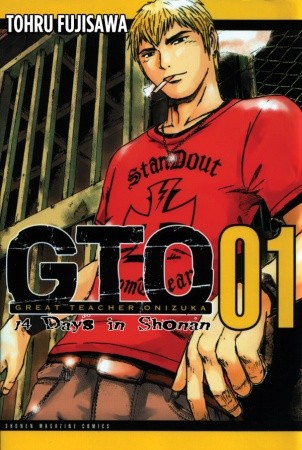 14 Days in Shonan — a sequel to the wildly popular GTO: Great Teacher Onizuka — follows the same basic template as the original stories, pitting the hellraiser-cum-homeroom teacher against a posse of troubled teens. This time, however, the action unfolds in Onizuka’s hometown, where he takes up residence at a group foster home after disgracing himself on national television. (“I just tried to tell a fun little story, and see what happened,” he fumes.) Hijinks and beatdowns ensue when one of the residents wages a vicious campaign to send Onizuka back to Tokyo — a campaign that repeatedly backfires, thanks to Onizuka’s cheerful determination and  strong constitution. (No one takes a baseball bat to the head quite like Onizuka.)

Though the hijinks are amusing, what makes 14 Days in Shonan work is its sincerity. In many stories told from the teacher’s point of view, the teacher is a sardonic observer of student behavior, bemoaning his charges’ lack of knowledge, manners, or interest in the subject. 14 Days in Shonan, however, offers a rosier picture of teaching, one in which a good educator plays a decisive role in improving his students’ lives, whether they be victims of bullying or survivors of parental abuse. At the same time, however, author Toru Fujisawa pokes fun at the conventions of the To Sir With Love genre, gleefully mocking Eikichi Onizuka’s unorthodox methodology, gullibility, and exaggerated sense of importance; Onizuka may get results, but they almost always come at the expense of his dignity.

And oh! those affronts to his dignity are hilarious. Onizuka is teased by teenagers and cops alike: they insult him, remind him that he’s a virgin, and Photoshop his image, placing him in suggestive situations. Though he tries to maintain a suave facade, Onizuka can barely contain his embarrassment at the way he’s treated; not since Mr. Bean has a character been able to contort his face into so many distinctive states of disgust, arousal, or surprise.

But the most surprising thing about 14 Days in Shonan is its ability to address serious social problems without devolving into an Afterschool Special. The hand-to-hand combat and barrage of condom jokes helps mitigate against didacticism, to be sure, but Fujisawa is skillful enough to make the students’ personal troubles a meaningful — and sometimes moving — part of the story, inspiring Onizuka to new heights of creativity (and silliness) in his efforts to reach them. It’s never entirely clear when Onizuka is deliberately playing the fool, and when he’s genuinely out of his depth, but Fujisawa is always generous in giving his brash hero credit for helping students, even when Onizuka looks ridiculous.