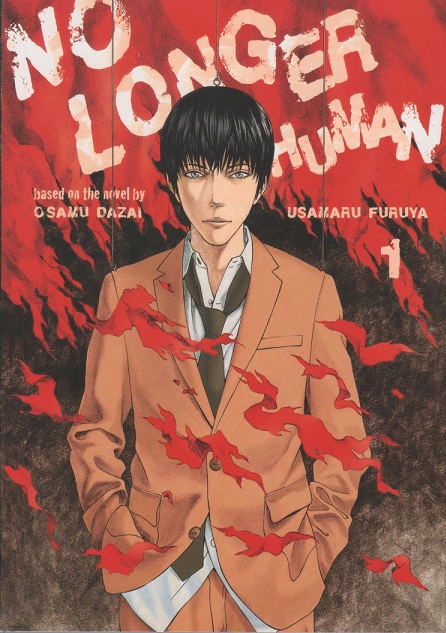 First published in 1948, Osamu Dazai’s No Longer Human became one of the most widely read books in post-war Japan. The story, modeled on Dazai’s own life, chronicles a dissolute young man’s profound estrangement from his family and peers. The protagonist’s life follows a trajectory similar to Dazai’s: convinced that his life is an empty charade, Yozo drops out of school; joins the Communist Party; enters into a suicide pact with a virtual stranger; and woos lonely women, using them for shelter, emotional comfort, and financial support after his father, a prominent politician, disowns him.

The novel is divided into three sections, or “notebooks,” each corresponding to a period in the protagonist’s life. In the first, Yozo describes his childhood: his uneasy relationship with his father, his clownish behavior at school, and his abuse at the hands of a female servant. In the second and third sections, Yozo documents his troubled adulthood, as he abandons school for a life of drinking and illicit relationships, bouncing from one woman to the next with little regard for the harm he causes them — or himself. Framing Yozo’s story is a second narrative delivered by an unnamed author who has found three photographs of Yozo: as a child of ten, “a small boy surrounded by a great many women”; as a college student, handsome but “strangely unpleasant”; and as man in his later twenties, his hair “streaked with gray,” and his face “devoid of expression.”*

Given the novel’s enduring popularity, it’s no surprise that several manga artists have adapted Dazai’s text as a graphic novel. Their approaches have ranged from reverential — the East Press edition (2007) hews closely to the original novel — to provocative — Yasunori Ninose’s version (2010) uses tentacle-porn imagery to represent the character’s extreme emotional distress. Usamaru Furuya’s 2009 adaptation falls somewhere in between, taking liberties with the setting and structure of Dazai’s work, while preserving the original tone and events of the novel.

As these myriad approaches suggest, one of the biggest challenges of translating No Longer Human into a pictorial form is its interiority: though eventful, Yozo’s story is as much about his state of mind as his behavior. Early in the novel, for example, Yozo describes his inability to understand how other people feel and think. “I have not the remotest clue what the nature or extent of my neighbor’s woes can be,” he tells the reader. “It is almost impossible for me to converse with other people.” In a desperate attempt to camouflage his bewilderment, Yozo constructs a jovial mask, winning approval from his family members and classmates with impish behavior and remarks. “I kept my melancholy and my agitation hidden, careful lest any trace should be left exposed,” he explains. “I feigned an innocent optimism; I gradually perfected myself in the role of the farcical eccentric.”

Furuya makes a game effort to find visual analogues for Yozo’s interior states. Whenever Yozo feels emotionally disoriented, for example, Furuya obscures the other characters’ expressions, rendering their faces as blurs. Furuya extends this symbolic approach to Yozo’s social paralysis as well. “I was congenitally unable to refuse anything offered to me by another person, no matter how little it might suit my tastes,” Yozo confesses. “In other words, I hadn’t the strength even to choose between two alternatives.” In these passages, Furuya draws Yozo as a marionette, violently manipulated by an unseen puppeteer; as a drowning victim, disappearing under the water’s surface; and as a man engulfed in flames, so consumed by his fear of disappointing others that he surrenders his own agency.

Though Furuya follows the basic outline of Dazai’s novel, he makes two significant changes to the text. First, he moves the story from pre-war Japan to the present day, replacing the unnamed narrator with a character named Usamaru Furuya, a manga artist who discovers Yozo’s pictures on the internet. Second, Furuya streamlines the script, all but eliminating the first notebook; instead, he depicts Yozo’s childhood through a few brief, suggestive flashbacks.

The first decision makes good sense. By moving the setting from Taisho-era Japan to the present, Furuya sheds the novel’s period trappings in favor of a milieu that readers can intuitively appreciate — a world of blogs, cell-phones, high-rise apartment buildings, and other technologies that promote social isolation.

Less successful is Furuya’s decision to focus on Yozo’s adult life to the exclusion of his childhood. In the original novel, ten-year-old Yozo crosses paths with another outsider, a young boy who immediately detects the effort and strain behind Yozo’s clowning.  Fearful that Takeichi will expose his deceit to the other students, Yozo dons “the gentle beguiling smile of the false Christian,” befriending the odd, unlikeable Takeichi in an effort to buy his silence. The episode is among the most potent and revealing in the book, an early example of Yozo’s ability to manipulate others, and a rare example of him acknowledging his own agency — something he never does in the manga.

Furuya also trims another brief but important scene from the early pages of No Longer Human, in which Yozo implies that he was molested by his wealthy family’s servants. “Already by that time I had been taught a lamentable thing by the maids and menservants; I was being corrupted,” Yozo declares. “I now think that that to perpetrate such a thing on a small child is the ugliest, vilest, cruelest crime a human being can commit.” Yozo’s indifference to others’ suffering, inability to experience romantic love, and passive-aggressive behavior, suggest a pathology rooted in this formative experience. Perhaps Furuya found this passage too neatly Freudian for his purposes, but in choosing to omit it, he makes Yozo seem like just another cad who beds and discards women, rather than a wounded soul incapable of sexual intimacy.

Yet for all its shortcomings — the omissions, the obvious symbolism — Furuya’s adaptation still captures the raw power of Dazai’s original novel. In its best passages, Furuya makes us feel as dazed and lonely as Yozo himself; we appreciate how helpless he feels, though we can see how seductive — and dangerous — he can be. Furuya also manages to document the full extent of Yozo’s debauchery without eroticizing it; we are keenly aware of the emotional distance between Yozo and his sexual conquests, making these scenes feel joyless and awkward, rather than titillating in their explicitness.

In short, Furuya has found a way to transform Dazai’s sharp critique of pre-war Japanese society into a more universal text, one that raises the question, What does it mean to be human right now?