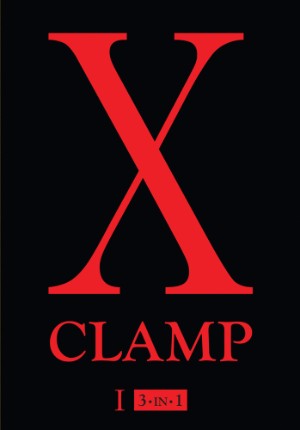 As a child of the 1970s, I appreciate a good disaster flick, whether the devastation is local or global, natural or man-made. There’s something immensely satisfying about watching the world go up in flames, only to walk outside the theater and be reassured by the presence of stop lights, busses, coffee shops, and pedestrians going about their business. Small wonder, then, that I adored CLAMP’s X back in 2003. Not only did it have an impossibly large cast of attractive characters, it also boasted awesome scenes of destruction — scenes worthy of a Hollywood blockbuster.

When VIZ announced that it would be reissuing X in a deluxe edition, however, I had misgivings about the project: would the apocalypse be as good the second time around?

In 2003, I’d swooned over the illustrations, re-read favorite scenes, and marveled at the fact that all the characters dressed like refugees from a 1980s music video. Though my inner snob normally disdained anything so purple, I secretly loved the all-caps dialogue, the swirling lines and wind-swept hairdos, and the melodramatic death scenes, not to mention the eerie, post-apocalyptic dream sequences that were sprinkled throughout the series. X read like a hybrid of The Seventh Sign (not to be confused with The Seventh Seal, a much classier flick), Götterdämmerung, and Captain EO, and I couldn’t get enough of it.

At the time I was collecting X, I hadn’t read much else, save a handful of manga by CLAMP and Rumiko Takahashi. The very qualities that drew me to X — angstful conversations, tortured characters — soon had the opposite effect on me: I started to avoid comics in which the emotional volume was cranked up to eleven on every page, as I found them exhausting, the manga equivalent of Tristan and Isolde. Re-reading Tokyo Babylon, for example, I was mortified by my initial enthusiasm for the story, which now seemed hopelessly overripe to me; not since I’d re-read The Lion, The Witch, and The Wardrobe had I been so disappointed by a favorite text.

Revisiting X proved a more rewarding experience, though the series’ structural flaws were more readily apparent on a second reading. The dialogue, for example, is often unintentionally hilarious: bystanders comment on the main characters, helpfully telling us how wonderful they are (“Last week, he saved my son from drowning in the river,” one anonymous mother says of Fuma), while the main characters introduce themselves to one another as if they’re networking, not preparing to kill each other. (Sample: “The name’s Sorata Arisugawa! A cute ‘n’ fun-lovin’ high school senior!” “Allow me to return the favor. I am Yuto Kigai. A humble public servant in the local ward office.”) Kotori, the first major female character to be introduced, embodies the Mary Sue concept to a tee; not only is she beautiful, kind, and long of hair, but she’s also very delicate, beset with a heart so weak that she collapses whenever someone frowns. More amusing still are the characters who materialize at the very moment they’re needed: witness the introduction of Tokiko Magami, a school nurse who just so happens to be Kamui’s sole surviving relative, and a fount of information about Kamui’s mother.

Yet these moments of narrative clumsiness are overpowered by the sheer force of the imagery. The battle scenes are kinetic and violent, as characters leap across rooftops, level buildings, and plunge their swords into one another; few licensed shojo or shonen titles can match the gory zest with which CLAMP executes these moments of hand-to-hand combat. The dream sequences, too, are shockingly graphic: characters are dismembered, crucified, impaled, and engulfed in flames, often right before their loved ones’ eyes. Though these images teeter on the brink of kitsch — in one dream, Kamui cradles Kotori’s severed head in his arms — they underscore one of the series’ most important points: sacrifice and loss are a fundamental part of becoming an adult, whether that sacrifice means leaving one’s family (as Sorata and Lady Arashi have done) or losing them (as Kamui, Fuma, and Kotori do in the early chapters of the manga).

The series’ other major theme — that humans are poor stewards of Mother Earth — is less successfully illustrated; three volumes in, it still isn’t clear what, exactly, the Seven Seals are charged with doing: preventing nuclear war? staving off pollution? protecting spotted owls? What will happen if the Seals fail, however, is evocatively rendered; CLAMP draws a post-apocalyptic Tokyo worthy of Katsuhiro Otomo, a landscape of twisted skyscrapers and rotting corpses slowly engulfed by sand dunes.

The fact that these images appeared in Monthly Asuka and not Young Magazine is what makes X so remarkable: it may not be the best shojo fantasy ever written, but it certainly is one of the bloodiest, a fierce, angry blast of emotion that scorches everything in its path. I hesitate to suggest that X‘s body count is an achievement, but it is sharp and welcome rebuke to the idea that female readers strongly prefer conversation and character development to butt-kicking and carnage. Count me in for volume two.