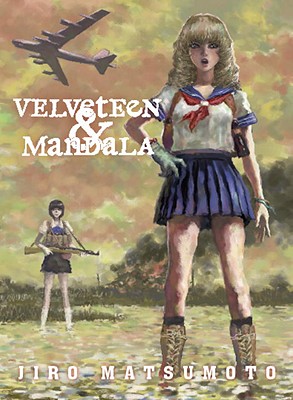 Jiro Matsumoto’s Velveteen & Mandala, a phantasmagoria of zombie-slaying, nudity, and poop, seems calibrated to shock readers into nervous laughter, though it’s never entirely clear if Matsumoto has a greater point to make. Like many of the shorts in the AX anthology, Velveteen & Mandala lacks any overarching sense of narrative direction or social commentary. The volume consists of fourteen loosely connected vignettes starring Velveteen, a ditzy blonde, and Mandala, her frenemy. Both are living on the outskirts of Tokyo, though the time is left to the reader’s imagination; all we know is that a war has ravaged the city, reducing it to a weedy sprawl of corpses, tanks, and abandoned buildings. In some of the stories, the two wield pistols and patrol their territory, shooting anything in sight; in others, they forage for food; and in others, their girlish horseplay shades in sadism or sexual violence.

The first three chapters are relatively innocuous, documenting the minutiae of the girls’ day-to-day existence. Velveteen lives in an amnesiac fog, snapping to consciousness only when she devises a new technique for torturing Mandala. Mandala, too, delights in annoying her friend, adopting verbal mannerisms that drive Velveteen to violent distraction. Neither seems particularly bright; their dialogue and destructive behavior make them seem like a pair of mean-spirited ko-gals.

The series takes a turn for the ugly in “The Super,” a brief story introducing a nameless, pantsless man to whom Velveteen administers a sharp crack on the head. (She wants to keys to his secret stash of weapons. And taxidermy animals. Yes, we’re in Underground Comix territory, folks.) From there on, Matsumoto begins playing up the scatological angle; we’re treated to numerous scenes of Velveteen defecating and vomiting, as well as images of her exposing herself.

The nadir is a gang rape scene in which Velveteen narrowly escapes her captors thanks to an explosive bout of indigestion. I’m guessing — perhaps wrongly — that Matsumoto intended this episode as a particularly nasty joke, designed to an elicit an appreciative “Dude! That’s so gross!” from readers. But as a feminist, it’s impossible not to find this passage yet another tiresome example of a male artist using sexual violence to titillate and shock the reader. (The loving way in which he draws a semi-naked Velveteen only confirms the pornographic impression.) Making things worse is that Matsumoto doesn’t just suggest that Velveteen is dirty, he literally covers her and her would-be assailants in her own filth. Nothing about the character or the story suggests that Matsumoto is trying to make a greater point about sexual violence, or level the playing between victim and attacker, or make the reader uncomfortably aware of his arousal at the scene; if anything, the cruelly unflattering way in which Matsumoto portrays Velveteen suggests a deep contempt for teenage girls.

Perhaps the most frustrating thing about Velveteen & Mandala is that Matsumoto is a genuinely good artist. His linework is superb, reminiscent of Taiyo Matsumoto and Daisuke Igurashi; it’s scratchy and energetic, well-suited to depicting the urban wasteland in which the story unfolds. His characters’ faces are superbly animated, too; few artists can draw malicious glee or surprise with such precision, even if that skill is put in service of drawing a thoroughly repellent cast.

Yet for all the obvious artistry behind Velveteen & Mandala, it’s a stretch to call this book a Hobbesian meditation on survival. Matsumoto’s dialogue is too stylized to register as genuine communication, while his fixation on the most bodily aspects of existence comes off as coprophilia, not meaningful commentary on the human condition. A more thoughtful artist might have found a way to put an intelligent or funny spin on the schoolgirls-slay-zombies premise, but in Matsumoto’s hands, the underlying message seems to be that teenage girls are just as nasty and despicable as the rest of us, as evidenced by the fact that they poop and puke, too.

Review copy provided by Vertical, Inc. Velveteen & Mandala will be released on August 30, 2011.