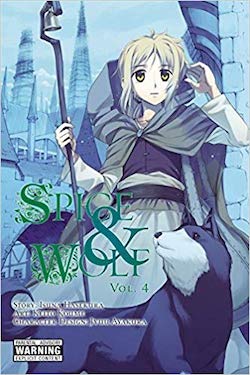 At some point in your childhood, a well-meaning adult — a parent, a teacher, Mr. Rodgers — exhorted you “not to judge a book by its cover.” I’m not as diligent about following that advice as I should be, though I have enough experience as a consumer to correctly guess a book’s contents and intended audience from the packaging. Every now and then, however, I completely misjudge a title, as I did with volume four of Spice and Wolf. The cover suggested a fantasy-adventure in a medieval setting — perhaps something along the lines of Claymore — but the story read more like an economics textbook with sexy illustrations.

Ostensibly, Spice and Wolf focuses on the relationship between Holo, a six-hundred-year-old wolf god, and Lawrence, a twenty-five-year-old human. The two meet cute when Holo stows away in Lawrence’s wagon, looking for a ride to her homeland of Yoitsu. Though they’re temperamental opposites — Holo is crafty and impulsive, Lawrence is deliberate and careful — the two discover that they make good business partners; Holo’s ability to manipulate trading partners complements Lawrence’s financial acumen and risk assessment skills.

That’s not a bad premise for a manga; in the right hands, Holo and Lawrence’s travels could be the basis for a smart social satire or an engaging comedy. Unfortunately, the script frequently requires Lawrence to explain the finer points of loans, currency, and inventory control to Holo, expositions that are about as much fun to read as a chapter from Modern Management: Concepts and Skills. Holo’s responses are equally stultifying; in one scene, she cheerfully tells Lawrence, “It’s my intention to pay you back with interest. That means the more I borrow, the more you profit.” Ace student, that Holo.

These tedious exchanges about interest rates and guild politics are occasionally interrupted by comic interludes, usually prompted by Holo’s discovery of a stash of booze or Holo’s decision to groom her tail, an elaborate procedure that requires her to assume a number of fetching poses as she preens. If there was any chemistry between Holo and Lawrence, these scenes might not feel so completely perfunctory, but they serve little purpose beyond catering to the male reader’s gaze. Worse still, the story lacks any sense of urgency or purpose; the dramatic climax of volume four involves Lawrence discovering that he bought a wagon’s worth of worthless armor. There’s more at stake in a typical episode of The Apprentice, and they’re hawking salad dressing and mattresses.

Yet for all my criticisms of Spice and Wolf, I can see why the series has a devoted following. The artwork is immaculate, with clean lines, appealing character designs, and meticulously rendered landscapes, buildings, and urban markets; Keito Koume’s crowd scenes bustle with activity, as characters negotiate deals and flirt with each other, bringing the walled medieval towns to vivid life. The supporting cast, too, boasts some memorable characters. In volume four, for example, Lawrence and Holo cross paths with Norah, a shepherdess whose pleasant demeanor masks a complicated personal history. The volume closes with a bonus story showing us Norah’s visit to a local town, followed by a difficult night when she and her dog Ennek hide from Church authorities. It’s a simple mood piece, but it’s tense and effectively staged, hinting at the broad — even overreaching — power invested in religious authorities.

That the Church’s power and history remain mysterious four volumes into the manga points to the series’ biggest problem: most of the interesting conflicts in Spice and Wolf are so deeply buried beneath the commercial shop-talk that they barely register at all. As a result, Spice and Wolf reads more like Project X: Cup Medieval Noodle than a proper drama; what it desperately needs is a high-speed wagon chase, sword fight, or — dare I say it? — a love scene to goose the proceedings.

Review copy provided by Yen Press. Volume four of Spice & Wolf arrives in stores on May 31, 2011.