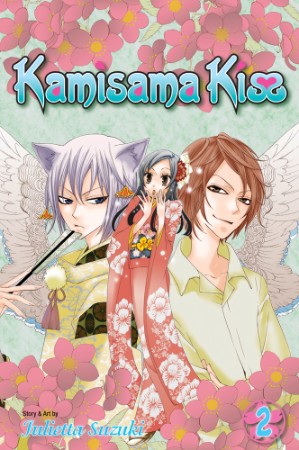 Has Japan experienced a recent surge in pachinko-related child abandonment? I ask because Kamisama Kiss is, by my count, the fourth manga I’ve read in which a parent (a) racks up gambling debt (b) angers his creditors and (c) skips town, leaving his son or daughter to deal with the consequences. Nanami, Kamisama‘s plucky heroine, comes home from school to discover an eviction notice on the kitchen table alongside a hastily scrawled letter: “I’m going on a trip. Sorry. Don’t look for me. Dad.”

With no place to go — apparently, she has no relatives or friends with a couch — Nanami begins camping out in a local park, where she rescues a nervous man from an aggressive dog. As an expression of gratitude for “saving” him, Mikage offers Nanami a place to stay. What Nanami doesn’t know is that Mikage is the deity of a small, decrepit shrine, and is responsible for maintaining it, hearing visitors’ prayers, and warding off evil spirits — responsibilities he passes on to Nanami by planting a kiss on her forehead.

Once ensconced in the shrine, Nanami meets Mikage’s familiar, a haughty fox demon named Tomoe. You don’t need a PhD in Manga to guess what sort of chap Tomoe is: he’s good-looking, perpetually cranky, and quick to insult his new boss. The two bicker constantly about issues great and small, from Tomoe’s snotty tone of voice to Nanami’s inability to defend herself against demons. Over time, however, the two form a reluctant partnership, pledging to protect the shrine together.

If the story feels a little shopworn, the characterizations are vivid and engaging. Julietta Suzuki does a credible job of showing us how Nanami and Tomoe discover that they’re more alike than different; as their antagonistic banter reveals, both are stubborn, loyal, and concerned with other people’s welfare. Making those tart exchanges more entertaining is the fact that Nanami and Tomoe are equally matched; Nanami isn’t as verbally adroit as Tomoe, but she’s perfectly capable of tricking or browbeating him into following her orders.

Where Kamisama Kiss runs aground is in the predictability of its plotting. Every crisis — a threat to the shrine, the introduction of a romantic rival — builds to a crucial moment in which one character realizes that he or she can’t do without the other. Of course, neither is willing to label those feelings as love, forcing the story into an indefinite holding pattern in which the leads teeter on the brink of romance for dozens of chapters. Even the introduction of demonic rivals doesn’t do much to distract from the obvious plot turns, though it does provide Suzuki a swell excuse to draw fancy kimonos, angel wings, and androgynous boys. (I particularly liked the tengu who hid in plain sight by pretending to be a teen idol. Now I’d read a manga about him.)

I liked Kamisama Kiss, but found it totally forgettable — the umpteenth story in which characters from two very different worlds fall in love in spite of their differences. To be sure, there’s a certain pleasure in seeing an author put her romantic leads through their paces, but Suzuki adheres so strictly to the opposites-attract formula that the story practically writes itself.