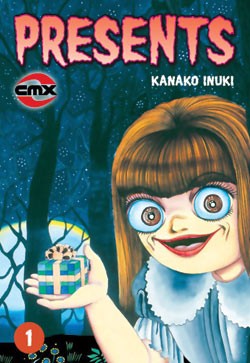 Back in 2007, John Jakala coined the trademark-worthy phrase “comeuppance theater” to describe horror stories in which a mean, violent, or greedy person gets his just desserts: a vain woman becomes visibly grotesque, a murderer dies at the hands of his victim’s ghost. In order for comeuppance theater to be dramatically persuasive, the author needs to do more than just dream up a suitably ironic punishment for the villain; he needs to convince us that the villain is sufficiently deserving of said punishment, that the villain is, in fact, monstrous in his desires or behavior and not simply an average joe exercising bad judgment. We may not be rooting for the villain’s demise — we may even feel a twinge of sympathy for him or self-identification with his plight — but if the author has done his job, the villain’s punishment seems necessary for restoring the social order.

In Presents (CMX), Kananko Inuki puts an interesting spin on the material, using our love of gifts as the jumping-off point for some funny, nasty, and intelligent episodes of comeuppance theater. The series’ host is Kurumi, a strange little girl who doles out presents to bad people and victims alike. Some gifts prove the recipients’ undoing: in “Present of Love,” for example, a manipulative college student goads her suitor into buying expensive jewelry that he can’t afford, even though she loathes him. His last gift to her — a set of earrings that Kurumi promised would “bring them together” — initiates a chain of events that unite the foolish pair in death. Other gifts provide victims a tool for payback: in “The Scary Present,” Kurumi gives a giant, man-eating box to a girl whose big sister gives horrific, mean-spirited gifts, while in “The Return Present,” Kurumi helps a bullied teen find an appropriate present for her tormentor.

Not all the stories follow this exact template; Kurumi becomes less central to the plots in volumes two or three, sometimes functioning as a passive observer, other times not appearing in the story at all. Volume two, for example, opens with a peculiar — and not entirely successful — trio of stories about Christmas gifts’ potential to corrupt little kids. Other stories read more like fairy tales: in “Dream Present,” a young woman endures a series of painful rituals in order to win a prince’s hand in marriage (in homage to Cinderella’s stepsisters, she even dispenses with a few toes), while in “Konotori” (or “stork”), magical cabbages bestow fertility on deserving couples.

The most potent stories shed light on the indignities of childhood, especially playground politics. Many of Presents‘ female characters are preoccupied with their place in the school’s pecking order, selecting uglier or quieter classmates to serve as foils more than friends. Rinko, the mean-girl villain of “The Return Gift,” is a classic example, calmly admitting that her friendship with the shy, slow Suzuko makes her “relax and feel better about herself,” then quietly fuming when Suzuko begins coming into her own socially and academically. The principal characters in “The Keepsake” and “The Most Wanted Present” are similarly opportunistic, demanding extreme fealty from lonely, passive classmates; when these eager-to-please girls die in an effort to honor their promises, their tormentors suffer retribution from beyond the grave.

Frenemies are a staple of young adult literature, of course, but the bald presentation of the issue in Presents conveys the cruelty of the behavior more effectively than a more restrained, realistic depiction could, capturing the intensity of both the bully and the victim’s feelings in an immediate, visceral fashion. Inuki’s imagery in all three stories is cartoonishly grotesque: Rinko, for example, develops monster zits that look more like the handiwork of an alien virus than P. acnes, while Mamiko, the manipulative frenemy in “The Keepsake,” winds up with a grotesque scar on her chest in the shape of her dead friend’s profile. (Mamiko coveted Sakiko’s cameo brooch.) The pimples and the scars make visible Rinko and Mamiko’s true selves; though both are fully aware of what they’re doing (“I was happy to see the look of distress on Sakiko’s face,” Mamiko narrates), it’s not until they see their deformed likenesses that they grasp how hurtful their behavior really is.

The fact that bullies, mean girls, and big sisters factor so prominently into Presents suggests that Inuki was writing for a younger audience, a supposition borne out by her fondness for goosing the story with fleeting but gross images: a box of cockroaches, pus-covered wounds, rotting corpses. It’s a pity, then, that CMX opted for a Mature rating, as I think the series works well for teens, depicting the emotional horrors of childhood in a vivid, gruesomely funny way. The stories are varied enough to sustain an adult’s interest as well; readers with fond memories of Tales from the Crypt or The Twilight Zone will find a lot to like about Inuki’s work, from the efficiently of her storytelling — many of Presents‘ best chapters are less than twenty pages — to the pointedness of her punishments.

The Best Manga You’re Not Reading is an occasional feature that highlights titles that aren’t getting the critical attention — or readership — they deserve. Click here for the inaugural column; click here for the series archive.

8 thoughts on “The Best Manga You’re Not Reading: Presents”