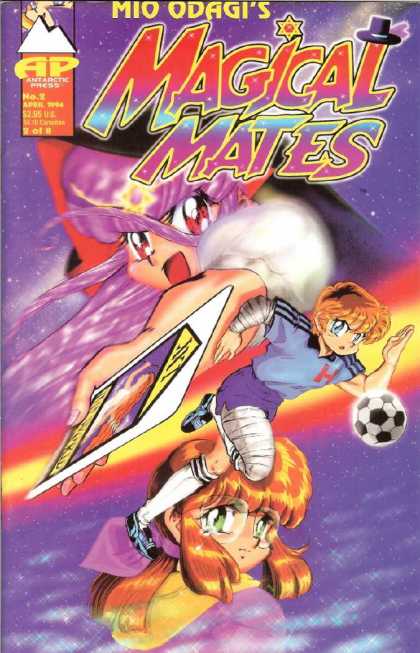 It’s hard to remember a time when the only translated manga featured explosions, monsters, and naked women, but for most of the 1980s and 1990s, manly-man manga was the norm; American publishers barely acknowledged that female comic fans existed in or outside Japan. There were licensed manga with female protagonists, to be sure, but The Legend of Mother Sarah and Mai The Psychic Girl were clearly written for male audiences, as the reductive tagline on Mai‘s front cover attests: “She is pretty. She is psychic. She is Japanese.” (Read: “She might go out with you.”) That began to change in the mid-1990s, when a few publishers made the then-radical decision to introduce manga for girls. VIZ released Moto Hagio’s They Were Eleven (1995) and A, A’ (1997); Mixx made a hit out of Naoko Takeuchi’s Sailor Moon (1997); and Antarctic Press, home of Ninja High School and Hurricane Girls, dabbled in shojo with Mio Odagi’s Magical Mates (1996).

If VIZ took the high road, introducing readers to one of Japan’s most influential and beloved creators, and Mixx took the middle road, courting female fans of Mighty Morphin’ Power Rangers and the Sailor Moon anime, Antarctic took the cheap road, licensing a self-published work by an obscure artist. The fact that Magical Mates reached American shores at all had more to do with who Odagi knew than the quality of her work. As Jason Thompson explains in a recent House of 1000 Manga column, Odagi was a member of Studio Do-Do, a small group of artists that had an inside connection at Antarctic Press: Ippongi Bang, whose friendship with Antarctic staffers helped open the door for her fellow Studio Do-Do artists.

Flipping through the six issues that comprise Magical Mates, Mio Odagi’s lack of skill is painfully obvious. The stories — which focus on a trio of tarot-reading, spell-casting teens — abound in the kind of poorly drawn panels and non-sequitors that would make a Hana to Yume editor pull out her hair. Odagi lavishes considerable attention on her characters’ eyes, rendering their irises and lashes with a meticulous precision that’s fundamentally at odds with the slapdash way she draws the rest of their bodies. She also struggles with backgrounds; her characters often appear to be floating above the picture plane, unencumbered by gravity.

Each story revolves around a romantic entanglement of one sort or another: in “Love on a Friendship Bracelet,” for example, Rinko, Kana, and Noemi help the manager of the boys’ soccer team express her feelings to the arrogant star player, while in “The Priestesses’ Love Letter,” the girls play matchmaker for the class brain and the rock guitarist she secretly adores. Not much connects the episodes, save for running gags about Rinko’s vanity — she vies with Kana and Noemi to be the “star” of the series — and about Rinko’s long-suffering suitor Eiji, a short, bespectacled nerd with an alter ego: The Student President of Darkness, a malicious teen who carries out Eiji’s darker wishes.

The Student President of Darkness gag embodies what’s good and bad about Magical Mates. Eiji’s frequent transformations are the kind of problem that could easily be fixed by logic or a lanyard; the fact that he’s always absent when the President is sabotaging a soccer match or flooding a water park doesn’t seem to register with Rinko or her friends. Yet for all the suspension of disbelief that Eiji’s Jekyll-and-Hyde persona demands, these transformations serve an important function, adding a badly needed element of emotional authenticity to Magical Mates; Eiji’s jealousy feels more real than anything else in the series, providing a reliable source of comic relief and dramatic conflict.

More striking than the stories themselves is Antarctic Press’ attempt to position Magical Mates as a comedy that older male readers would enjoy. Each issue featured advertisements for comics such as Warrior Nun Areala, Codename: Scorpio, and the NC-17 vampire comic Tabou, which had a tie-in with an adult film. Though the covers seem less deliberately calculated to appeal to male readers than the advertising, issue four is a notable exception: all three girls have been given a sexy makeover with super-long legs, savage tans, and skimpy bathing suits that are completely out of character. The one fan letter that Antarctic published — which appears on the back page of issue four — comes from a male reader who complains that he doesn’t like Magical Mates‘ cover art or title. “It’s got that Sailor Moon stigma,” he notes. “I hope readership picks up, and that people don’t get the wrong idea and think this is some sort of bland children’s comic.”

With the benefit of hindsight, it’s easy to fault Antarctic for treating Magical Mates as something other than a “children’s comic,” as its tone and episodic structure seem best suited for young readers. Yet at the time Mates debuted, there was no obvious market for girls’ manga. The Sailor Moon anime was just beginning to reach female audiences here in the US — it was still two years away from becoming a big hit — and American publishers had been neglecting the female comics market for decades. Antarctic made a logical gamble, presenting Mates as a wacky comedy starring three cute girls rather than a wacky comedy written for girls, never acknowledging that Odagi’s artwork, plotlines, and sensibility owed a significant debt to the magical girl genre.

Had it been marketed differently, Magical Mates still might not have found an audience — Moto Hagio, after all, bombed with readers, despite her impeccable pedigree and formidable talent. Yet Mates is significant because it anticipated the kind of shojo that caught on with American girls in the following decade, with its focus on romance, wacky hijinks, and unabashedly teen pursuits, from telling fortunes and swapping love charms to visiting amusement parks.

Readers curious about Magical Mates can find inexpensive copies of all six issues on eBay; note that Antarctic initially planned a nine-issue series, but canceled the last three.