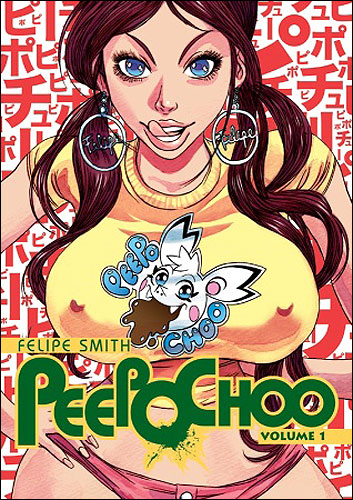 When I was fifteen and in the throes of my mope-rock obsession, I fantasized a lot about England, home to my favorite bands. I imagined London, in particular, to be a place where everyone appreciated the sartorial genius of Mary Quant, fashionable ladies accessorized every outfit with a pair of shit kickers, regular moviegoers recognized Eat the Rich as brilliant satire, and — most important of all — teenage boys appreciated girls with dry, sarcastic wits and gloomy taste in music. You can guess my disappointment when I finally visited England for the first time; not only was London dirty, expensive, and filled with tweedy-looking people who found my taste in clothing odd, many of the teenagers I met were fascinated by American pop culture, pumping me and my companions for information about — quelle horror! — LL Cool J. I could have died. Though I’ve gone through similar phases since then — Russophilia, Woody Allenomania — I’ve never been able to abandon myself to those passions in quite the same way, knowing somewhere in the back of my mind that all Muscovites weren’t soulful admirers of Shostakovich and that most book editors didn’t live in pre-war sixes on the Upper East Side.

When we first meet Milton, the loser-hero of Felipe Smith’s visually dazzling Peepo Choo, he’s still innocent enough to believe that his love for anime makes him an honorary Japanese citizen. Milton proudly declares himself an otaku, viewing Japan as his spiritual home, a place where “everyone is nice,” “everyone cosplays,” and “everyone watches anime and reads manga.” “If I lived in Japan,” he tells himself, “I could be de me. The real Milton!” Looking at Milton’s life, it’s easy to see why Japan looms large in his imagination; when contrasted with his chaotic home — he shares a bedroom with eight rambunctious siblings — and crime-plagued Chicago neighborhood, Tokyo appears to be a model of order, a place where cuteness and civility prevail. What Milton discovers is that his Japan is nothing like the reality, a place populated by drunken salarymen, violent criminals, hairy cross-dressers, and puzzled commuters who wonder why he’s cosplaying on the subway. “There’s hostility in the air,” a deflated Milton observes upon spending his first day in Japan. “I know this feeling too well. I just never thought I’d feel it in Tokyo.”

Milton isn’t alone in his delusions; most of the characters in Peepo Choo are engaged in one form or another of culture shopping, trying on personae like so many pairs of jeans. There’s Jody, the jaded comic-store employee who adopts a street-thug pose and brags about his bedroom conquests, when, in fact, his sexploits amount to watching a lot of porn; there’s Takeshi, a wimp who reinvents himself as Morimoto Rockstar, a pimped-out yakuza whose greatest ambition is to emulate the Brick Side thugs (an imaginary Chicago gang); there’s Reiko, a voluptuous teen model who also cops a ghetto style and attitude, wearing enormous hoops and tiny shorts and backing up her demands for respect with foul language, middle fingers, and fisticuffs; and then there are the regulars at Enyo’s Collectibles, an anime-addled group of misfits who share Milton’s utopian vision of Japan.

To show us the unique lens through which each character views the world, Smith borrows a page from the William Faulkner playbook, switching “voices” as he moves from subplot to subplot. Milton’s story, for example, is punctuated by fantasy sequences that resemble a Takashi Murakami canvas; in Milton’s mind, even Japan’s landscapes have a pleasingly domesticated look, with smiling mountains and beaming suns presiding over a Noah’s Ark of anthropomorphic birds, cats, and hamsters. When Smith cuts to Gill, the hitman who runs Enyo’s Collectibles, the artwork becomes dark, ugly, and claustrophobic, evocative of such torture-porn films as Hostel and Saw. Smith shows us every blood splatter and cracked skull in gruesome, almost fetishistic detail, as Gill dispatches roomfuls of gangsters with gory abandon. (Gill even gets into character for his work, trading his suit and glasses for skull rings, a mohawk, and a Hannibal Lechter mask.)

Yet for all its technical virtuosity, there’s a hole at the center of Peepo Choo where its heart should be. Smith positively brutalizes his characters; in one scene, for example, two alpha girls dangle a bloody tampon in a classmate’s face, while in another, Takeshi disembowels a victim, carving a nonsense “Engrish” phrase into the man’s torso. The satirical intent of both scenes is obvious, but the crudeness of the satire feels more like provocation than actual commentary on manga cliches or Japanese fascination with American street life. The same goes for several sexually explicit passages in which Smith draws lusty women with watermelon breasts; it doesn’t take much imagination to see that he’s aping the visual language of Hustler and Playboy, but the scenes are too faithful to the source material to be anything more than affectionate parody.

Great satire is seldom generous or polite, but it shouldn’t be punitive, either, and that’s Peepo Choo‘s greatest shortcoming. Smith seems more intent on cranking up the sex and violence to eleven than making a real point about the ubiquity of either in seinen manga. I’m guessing — perhaps wrongly — that he’s hoping to implicate the audience in the characters’ rude behavior, to point out that it’s our own prurient interest in blood and boobs that drives creators to excess, but the point seems rather hollow when the artist himself seems to revel in his own ability to draw such mayhem. I wish I enjoyed Peepo Choo, as it’s obvious that Felipe Smith has the imagination and artistry to be a penetrating satirist; what Smith really needs is a little more empathy.