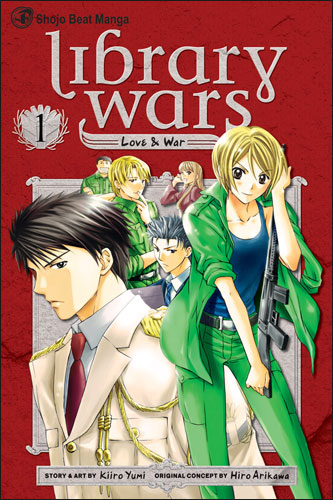 If I were thirteen years old, Library Wars would be at the top of my Best Manga Ever list, as it reads like a catalog of the things I dug in my early teens: books about the future, books about women breaking into male professions, books with bickering leads who harbor secret feelings for each other. I can’t say that Library Wars works as well for me as an adult, but I can recommend it to younger female manga fans who are tired of stories about wallflowers, doormats, or fifteen-year-old girls whose primary objective is to nab a husband.

The story focuses on Iku Hasahara, a former track star and future librarian who enlists in the Library Defense Force (LDF), a paramilitary organization dedicated to combating censorship. Formed in response to the Media Betterment Act, the LDF actively challenges the national government’s efforts to remove books from stores and libraries, using weapons and strong-arm tactics when necessary. Iku is the only female recruit who can keep pace with the guys, push-up for push-up, and is the frequent target of abuse from Atsushi Dojo, a handsome drill sergeant who takes grim delight in pointing out her weaknesses. (Her mastery of the Japanese Decimal System leaves a lot to be desired.) As Iku advances through basic training, however, she begins to realize that Dojo isn’t so bad; his sometimes brusque demeanor masks genuine concern for his pupil, and a sincere desire to help her become a top-notch officer.

Library Wars‘ premise certainly invites comparisons with Fahrenheit 451. The future society depicted in Library Wars isn’t nearly as bleak or disorderly as the one Ray Bradbury imagined back in 1951, but creators Hiro Arakawa and Kiiro Yumi are just as insistent on the importance of standing up for free speech; Iku joined the Defense Forces after the Media Betterment Committee’s jack-booted thugs attempted to confiscate a book from her. (A hot guy also factored into her decision to enlist.) The MBC is as arbitrary and ruthless as the Firemen of Fahrenheit 451, working hard to restrict citizens’ access to potentially “harmful” materials, even going so far as to infiltrate libraries to weed out undesirable material.

In adapting Library Wars from novel to manga, however, Kiiro Yuki places less emphasis on the book-banning crisis and more on her characters’ relationships, preserving just enough background about the LDF’s history to justify the action sequences. That’s not necessarily a bad choice; Iku and Dojo’s banter has a pleasant, antagonistic zing to it that infuses the boot camp scenes with some playful energy. The LDF’s rationale for existing, however, often seems underdeveloped, as we don’t know what prompted the national government to pass the Betterment Act. In leaving these details vague, one could argue that Yuki is simply being true to historical fact; oppressive regimes from tsarist Russia to Maoist China have arbitrarily banned books and condemned authors in the interest of “the national welfare,” yet in the context of the Library Wars manga, that lack of specificity comes off as sloppiness. We don’t know whether censorship is having a real impact on citizens’ ability to say and think what they please; the few scenes in which we glimpse the MBC in action suggest that they’re more of a nuisance than a genuine threat to the social order.

The artwork is serviceable but not great. The character designs are about as basic as they get, with haircuts playing a pivotal role in establishing each cast member’s personality; we know Iku is a tomboy from her sensible and slightly androgynous bob, for example, while Dojo’s neat ‘do paints him as a hardcore military man. (By contrast, Sgt. Komaki, the series’ designated McDreamy character, has the kind of tousled locks that wouldn’t pass muster in the Marines.) The action scenes are hasty affairs, rendered with little respect for continuity or background detail, while the layouts often feel busy, with too many small panels and design elements hampering the visual flow.

If the censorship theme and artwork aren’t as well executed as I might have hoped, Library Wars earns high marks for having a smart, capable heroine and a smart, topical premise. Iku may not be a wonder woman, but she’s a plausible mixture of strength and uncertainty; teen girls will relate to her shifting moods, fierce temper, and high principles, even if they can’t agree whether she should end up with Dojo. And really, what’s not to like about a series that features hot guys who hate censorship but like books, libraries, and butt-kicking women? Now there’s a fantasy female readers of all ages can endorse. 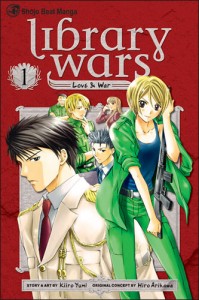