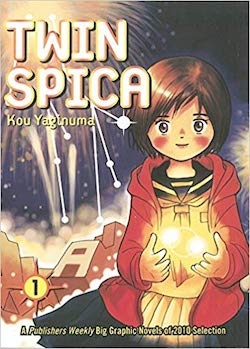 Asumi Kamogawa is a small girl with a big dream: to be an astronaut on Japan’s first manned space flight. Though she passes the entrance exam for Tokyo Space School, she faces several additional hurdles to realizing her goal, from her child-like stature — she’s thirteen going on eight — to her family’s precarious financial position. Then, too, Asumi is haunted by memories of a terrible fire that consumed her hometown and killed her mother, a fire caused by a failed rocket launch. Yet for all the pain in her young life, Asumi proves resilient, a gentle girl who perseveres in difficult situations, offers friendship in lieu of judgment, and demonstrates a preternatural awareness of life’s fragility.

If Asumi sounds like a stereotypically optimistic manga character, a can-do kid who maintains a positive attitude through every set-back, the first volume of Twin Spica reveals her to be more complex and damaged than her firm resolve might suggest. Mr. Lion, her imaginary friend, is proof of the wounds she carries: she “met” him when she was six, never quite outgrowing the need for his counsel or company. When Asumi suffers a traumatic flashback to the Yuigahama disaster, for example, she calls out Mr. Lion’s name; when her father responds angrily to the news that she passed the space academy’s placement test, she asks Mr. Lion if she should enroll or abandon her dream of becoming “a driver on a rocket.”

Though Asumi’s story ran in Comic Flapper, a seinen magazine, Twin Spica works surprisingly well for both adults and teens. The storytelling is direct and simple without being didactic, filled with the kind of characters that younger readers will recognize and embrace as true to their own experiences. At the same time, however, Twin Spica‘s subtexts are rich enough to sustain an adult’s interest, as the supplemental stories “2015: Fireworks” and “Asumi” attest. Both explore Asumi’s response to her mother’s death, acknowledging and validating Asumi’s curiosity about her mother’s appearance (Mom suffered disfiguring burns) and about dying itself. (Six-year-old Asumi scandalizes funeral-goers by leaning over her mother’s casket to see what death “smells like.”) Without a trace of mawkishness, Yaginuma shows us how Asumi makes sense of what happened to her mother, recognizing his young heroine’s keen emotional intelligence in the way she chooses to honor her mother’s memory. Tween and teen readers may well find these passages moving, as they touch on one of childhood’s most primal fears, but adult readers will find them more unsettling, as they remind us of our inability to protect children from painful experiences, and of the moment when we first grasped death’s finality.

The artwork, like the narrative, has a direct, expressive quality that keeps the focus on the characters’ interactions, rather than the gizmos and laboratories where their training takes place. Yaginuma draws his tyro astronauts in a simple, stylized fashion that treats them as collection of distinctive geometric shapes: Fuchuya, one of Asumi’s classmates, sports a ‘do evocative of Eero Saarinen’s iconic TWA terminal, while Asumi resembles a kokeshi doll with her exaggerated round head and tiny body. The characters’ slightly awkward proportions register as a deliberate artistic choice — call it studied naivete or primitivism — though at times the art seems a little clumsy and flat; readers will be forgiven for thinking Yusinuma’s storytelling skills outstrip his draftsmanship.

Whatever conclusions the reader reaches about Yusinuma’s style, it’s impossible to deny the emotional power of Twin Spica as a coming-of-age story about one girl’s journey from childhood to adulthood, and one nation’s journey from terrestrial power to space race competitor. A beautiful, thought-provoking book for star gazers of all ages.

Review copy provided by Vertical, Inc. Volume one of Twin Spica will be released on May 4, 2010.