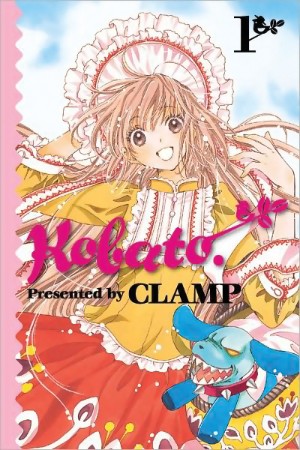 Kobato Hanato has a job to do: if she can fill a magic bottle with the pain and suffering of people whose lives she’s improved, she’ll have her dearest wish come true. There’s just one problem: Kobato is completely mystified by urban life, and has no idea how to identify folks in need of her help. Lucky for her, Ioryogi, a blue dog with a foul mouth and fierce temper, has been appointed her sensei and guardian angel, tasked with helping Kobato develop the the street smarts necessary for completing her mission.

It’s perfectly possible to read Kobato as a story about a sweet, clueless girl who teams up with a gruff but lovable animal to collect wounded hearts. That book is beautifully drawn, but isn’t terribly interesting; most of the stories follow the same template so, well, doggedly, that even the most committed fan of cute would find Kobato too repetitive to be much fun. A more productive way to understand Kobato is as a moe parody, a gleeful skewering of an entire genre in which the cute, underage heroine’s primary role is to endear herself to readers with her mixture of enthusiasm, naivete, and sensitivity.

Exhibit A in the case for moe parody: CLAMP has provided Kobato with a name and a mission, but no history that would explain her bizarre behavior. (Is she an amnesiac? An alien? A simpleton?) Nor does CLAMP reveal Kobato’s deeper motivation for collecting wounded souls. “There’s a place I want to go!” she cheerfully tells Ioryogi without elaborating on the why and where. Exhibit B: Kobato’s behavior seldom endears her to anyone. When Ioryogi instructs her to “do the things that are appropriate for Christmas,” for example, Kobato casually asks a stranger to spend the night with her in a hotel, to the consternation of his girlfriend, while an old man interprets her request to “heal his heart” as a solicitation for sex. Exhibit C: Ioryogi has a sadistic streak that far outstrips the basic demands of the plot. Though his comments are shockingly abrasive at first, it doesn’t take long for the reader to realize that Ioryogi’s assessment of Kobato is spot-on; in effect, he gives the audience permission to dislike Kobato, despite her sweet face and Holly Hobbie outfit.

Lest I make Kobato sound unbearably mean-spirited, the manga equivalent of kicking a puppy, let me assure you that it’s actually good fun. Ioryogi, the unquestionable star of the series, is a hoot; CLAMP wrings considerable laughs from the cognitive dissonance between his cute, doll-like appearance and his destructive rages, martial arts moves, and unsavory habits. (Like Mokona Modoki, Ioryogi is always jonesing after beer or sake.) Long-time CLAMP fans will enjoy the cameos sprinkled throughout the book, as characters from Chobits, Suki, and xxxHolic cross paths with Kobato in subtle, unexpected ways — think Where’s Waldo for the Card Captor Sakura crowd. (Bonus points if you can identify the characters without consulting the translation notes.) As one might expect, the artwork is clean and elegant, filled with beautiful costumes, lovely title pages, and crisply executed action sequences in the manner of Tsubasa: Reservoir Chronicles.

A quick glance at the Wikipedia entry suggests that future volumes of Kobato may cant more towards romance than satire. So long as Ioryogi is along for the ride, however, I’m confident that Kobato will remain edgy enough for readers, like me, who have a limited tolerance for insipid heroines. Recommended.

Review copy provided by Yen Press. Volumes one and two of Kobato will be released simultaneously on May 18, 2010.