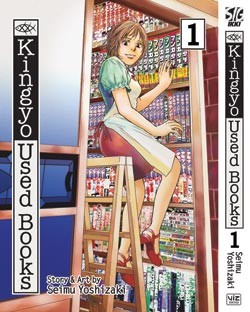 Kingyo Used Books starts from a simple premise: an eccentric group of people run a second-hand bookstore in an out-of-the-way location. Various customers stumble upon the shop — usually by accident — and, in the process of browsing, find a manga that helps them reconnect with a part of themselves that’s been suppressed, whether it be a youthful capacity for romantic infatuation or a desire to paint expressively.

Is there such thing as agit-manga? Because Kingyo Used Books seems like the brainchild of an editor who’s desperately trying to convince adults that one never outgrows manga. In the first story, for example, a salaryman tries to unload his collection at the store, telling the owner, “I’m not a kid anymore. Besides, it’s kind of pathetic to keep reading manga forever.” He gets a gentle comeuppance at a class reunion, where his friends’ fond memories of Dr. Slump remind him what an important role manga played in their young lives. The story is pleasant and enjoyable, but suffers from a bad case of predictability; as soon as the salaryman sees his friends engaged in tearful, rhapsodic discussions of their childhood reading habits, he’s overcome with emotion and — natch — a strong desire to keep the manga he’d previously hoped to sell.

Other stories in volume one follow the same basic template. In “Far Away,” for example, an archery champion discovers that laughter and downtime are as essential to winning as practice, thanks to a pair of Kingyo employees whose snot-rolling-down-the-face, tears-in-eyes response to Moretsu Ataru inspires the archer to pick up a manga instead of his bow and quiver. “Fujiomi-kun,” another chapter that adheres to this formula, focuses on a frustrated housewife who makes some small but important changes in her life after rediscovering Chizumi and Fujiomi-kun, a romance about a handsome athlete who falls in love with a clumsy but kind-hearted girl.

The series’ episodic structure cuts both ways, see-sawing between a fun exercise in formula — which manga will feature prominently in this story? who will be drawn into the store? — and a frustratingly obvious collection of beats culminating in a character’s decision to make a change in her life. I’d be lying if I didn’t admit the appeal of a series that highlights some famous (and, sadly, untranslated) manga, or that validates my own experiences as an adult manga reader; like many of the characters in Kingyo Used Books, I, too, have found titles as different as Suppli, Phoenix, and Night of the Beasts an outlet for emotions that don’t always find expression in my daily life. In settling for such a tidy approach to dramatizing manga’s transformative power, however, author Seimu Yoshizaki misses an opportunity to really move readers, instead treating us to sentimental, sometimes mawkish, scenes in which adults recover childhood memories of favorite books. Yoshizaki never acknowledges the messiness or risk that her characters take when acting on their epiphanies or experiencing personal growth, choosing instead to end every story on a positive note.

The artwork is clean, conveying the characters’ interior lives with directness and simplicity. Though her style isn’t particularly distinctive, Yoshizaki does a fine job evoking other artists’ styles, recreating images from famous series and altering one of her own characters to look like the hero of his favorite manga. The most striking image in the book is just such a recreation: it’s Hokusai’s iconic wave print, drawn in the sand by two students who then watch the incoming tide erase it. In the story’s final panels, the two reflect on their emotions as they watch their work vanish. One is pensive and wishes the work was permanent; the other responds by noting that permanence can be its own trap. “I’ve seen the pictures Hokusai drew when he was our age,” he says. “They really sucked.” Here’s hoping that volume two has more of these frank, funny, and true-to-life moments and fewer scenes of tearful housewives and salarymen reliving their childhoods through manga.