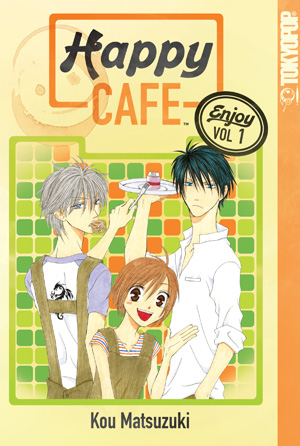 Two Guys, a Girl, and a Pastry Shop might be a better title for this rom-com about a teen who waits tables at the neighborhood bakery, as the characters are so nondescript I had trouble remembering their names. The girl, Uru, is as generic as shojo heroines come: she’s a spunky, klutzy high school student who blushes and stammers around hot guys, bemoans her flat chest, and wins people over with her intense sincerity. The two guys — Shindo, a moody jerk whose boorishness masks a kind nature, and Ichiro, a cheerful slacker — are just as forgettable, despite the manga-ka’s efforts to assign them novel tics and traits. Shindo, for example, turns out to be a genius who finished high school at fifteen, while Ichiro suffers from hunger-induced narcolepsy, keeling over any time his blood sugar drops.

The plot, like the characters, has a similarly generic quality. At the beginning of volume one, Uru walks past Cafe Bonheur, overhearing a conversation between two giggling, satisfied customers. She then resolves to land a gig at the “Happy Cafe,” as she calls it, but is nearly defeated by the job interview: she accidentally breaks the front door, endures rude comments from Shindo about her youthful appearance (she looks ten), and nearly falls over Ichiro, who’s sprawled, unconscious, on the kitchen floor. (Shindo administers first aid in the form of a bun, reviving his co-worker.) Undeterred, Uru pleads with Shindo for a job, eventually persuading him to hire her on a trial basis. Broken dishes and spilled coffee notwithstanding, Uru quickly insinuates herself into Shindo and Ichiro’s lives.

Happy Cafe aims for a mixture of wacky comedy and heartfelt drama, but doesn’t quite succeed on either count. The humor is mild but not very funny; the few good gags — Uru’s super-strength, Ichiro’s ability to nap anywhere, anytime — are repeated with little variation until they cease to register as jokes. The drama, too, is tepid and predictable; every conflict is resolved so neatly and sweetly that a strong whiff of pointlessness hangs over the whole enterprise. Early in the volume, for example, we learn that Uru is living on her own, thanks to her mother’s decision to marry a younger man. Uru misses her mom terribly, but worries that her presence interferes with mom’s new relationship. So far, so good: the idea of a mother allowing her sixteen-year-old to live alone is a little ridiculous, but the set-up could yield some juicy, emotional scenes. Matsuzuki squanders that potential by resolving the conflict in a matter of three pages: mom and stepdad beg Uru to return, Uru asserts her desire to visit but maintain her independence, and her parents shower her with affection. The end.

Matsuzuki’s artwork is serviceable, if not memorable. Her characters are virtually indistinguishable from the cast of Me & My Brothers, right down to their perfectly messy hair, rail-thin frames, and noseless faces. Matsuzuki struggles with more ambitious perspective drawings; some of her attempts to place characters on different levels in the picture plane result in unnaturally foreshortened bodies. Where Matsuzuki’s art shines is in her characters’ nuanced facial expressions. Uru’s round, open visage registers a convincing range of emotions, from embarrassment to loneliness to indignation. On those occasions when Uru smiles — sweetly or with mischievous intent — it’s easy to grasp why the terminally grouchy Shindo keeps her around, as the character radiates joy.

If I were to compare Happy Cafe with baked goods, I’d say it reminds me of a Duncan Hines cake mix: it’s easy to follow, yields predictable results, and, while sweet, is curiously bland. Readers in search of manga comfort food could certainly do worse than this sugary dramedy, though I’d steer more adventurous souls towards The Antique Bakery or Cafe Kichijoji de, both of which are funnier, tastier, and sexier than this by-the-book shojo title.