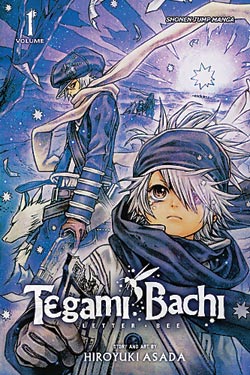 The problem lies with the story: manga-ka Hiroyuki Asada takes a simple premise and gussies it up with fussy, poorly explained details. The story itself may remind readers of Banya the Explosive Delivery Man or The Postman, as Tegami Bachi‘s principal characters are also mail carriers — or, in the series’ parlance, Letter Bees — who traverse dark wastelands to deliver letters and packages to the far-flung residents of their homeworld. In the case of Tegami Bachi, that homeworld is Amberground, a planet illuminated by a single, man-made star that hovers above its capital city, Akatsuki, where the wealthiest, most powerful citizens live. Amberground’s cities are separated by country inhabited only by Gaichuu, giant insects whose metal exoskeletons are impervious to most weapons, save the shindanjuu, or heart gun, the preferred sidearm of Letter Bees.

How, exactly, the shindanjuu works is never satisfactorily explained, despite its prominent role in the story. I had to consult the appendix, which defines “heart” as a magical, omnipresent energy that penetrates and surrounds most living beings, not unlike The Force. (The Gaichuu, lacking heart, are vulnerable to its awesome power, especially when it takes the form of hollow bullets). The shindanjuu also enables Letter Bees to experience other people’s memories in a vivid, almost hallucinatory fashion. As with the magic bullets, the gun’s dream-sharing capacity gets only a cursory explanation; the dream sequences are hella confusing, requiring several readings to figure out whose memories we’re seeing.

Tegami Bachi‘s other shortcoming is its two principal characters. Gauche Suede, the older, more experienced Letter Bee, is a stock shonen hero: a confident, tough-talking loner who turns out to be a softie under his cool, competent exterior. Lag Seeing, the younger one, begins his journey as a package — he’s one of Gauche’s deliveries — and decides to become a Letter Bee after Gauche safely guides them through Gaichuu-infested territory. Lag, too, is a familiar type, the slightly dim but very sincere Kid on a Mission who views mail delivery as his true calling. Both characters have sad back stories involving female relatives — again, a standard shonen trope that does little to enrich the story.

The artwork, on the other hand, is genuinely striking; Tegami Bachi is one of the best-looking titles in the Shonen Jump catalog. Hiroyuki Asada’s landscapes are beautifully rendered, giving a clear sense of Amberground’s geography, technology (they’re in the nineteenth-century Bavarian phase of development, to judge from the architecture), fauna, and flora. And man, what flora! In one amusing sequence, Lag fights Gaichuu in a forest of giant broccoli. Does make you wonder, though: how do those florets get so big without sunlight?

Asada makes effective use of screentone to capture Amberground’s perpetual night, reserving true black for the sky and for a few important details: Gauche’s jacket, the Gaichuu’s carapaces. He incorporates star imagery into almost every scene without it ever seeming cheesy or heavy-handed; the stars have symbolic importance, to be sure, but they also serve an artistic purpose, bringing light and contrast to a layout that might otherwise be a murky mess.

If I seem unduly harsh in my assessment of Tegami Bachi, it’s only because it has the potential to be good — really good, if Asada focuses more on character development and less on mystical hoo-ha. The premise lends itself to both a Delivery of the Week format, in which each chapter functions as a stand-alone story, and to a more traditional Boy on a Quest narrative, in which Gauche, Lag, or both set out to rescue the people they love. Either way, I’ll be picking up volume two to see if the storytelling rises to the level of the artwork.

Review copy provided by VIZ Media, LLC. Volume one will be available on September 1, 2009.