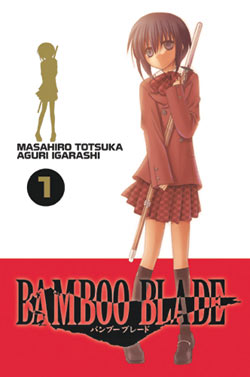 Dangerous Minds, Dead Poets Society, Stand and Deliver, and To Sir, With Love all depict teachers who are heroic in their self-sacrifice, renouncing money, family ties, and even their reputations in order to inspire students. Kojiro Ishido, the anti-hero of Bamboo Blade, won’t be mistaken for any of these noble educators. He’s bankrupt, morally and financially, and so eager to dig himself out of debt that he’d exploit his students in a heartbeat.

Kojiro’s troubles begin when he enters a bet with his old friend and sparring partner Toryah, an accomplished martial artist. If Kojiro can lead his school’s kendo club to victory over Toryah’s, Toryah will provide him with a year’s worth of free sushi from a top-notch restaurant. If Kojiro fails, he must surrender a personal treasure: the trophy he won for defeating Toryah at the 26th annual Shoryuki High School Kendo Meet. Making Kojiro’s job more challenging is the fact that Toryah coaches an all-girls’ squad; Kojiro’s co-ed team has but one female member, so he must recruit at least four more girls in order to scrimmage with Toryah’s crew. The few students who aren’t scared off by Kojiro’s acute desperation include Kirino, the club’s captain; Eiga, a plump boy who’d rather play ping pong; Nakata, Eiga’s best friend; Miya-Miya, a beautiful ditz; and Tamaki, an experienced swordswoman who initially rebuffs Kojiro’s entreaties to join the club.

Whether or not they’ll come together to form a proper team remains to be seen, but readers will be forgiven for bailing out before that point in the story, as Bamboo Blade quickly sinks under the weight of stale jokes and one-note characters. Kojiro, in particular, is a repellent creation: he’s mean, loud, and dumb, utterly lacking in the self-awareness or humility that would make him a sympathetic figure. A skillful writer might have found a way to make Kojiro’s nastiness funny — say, by making him more sardonic, or by drawing a sharper contrast between his pessimism and Kirino’s relentless optimism. Instead, Kojiro comes across as a crashing bore, a bully who’s incapable of speaking at conversational decibel levels or thinking of anything but his growling stomach. (He subsists on instant noodles and student handouts.)

The swordplay isn’t much better. Artist Aguri Igarashi’s fight scenes are impressionistic at best, employing speedlines to such a degree that it’s almost impossible to tell what’s happening in many panels; if anything, these scenes look like a forgotten Giacomo Balla painting: Kendo Fighters No. 1. I wished Igarashi had been more meticulous in showing how, exactly, a fight unfolds, from where the opponents strike one another to how they move across the floor, as there’s very little information about kendo anywhere in the story or the translation notes.

Given how exciting it is to watch a real kendo match, I’m convinced there’s a great story lurking deep within Bamboo Blade; I’m just not sure that Masahiro Totsuka and Aguri Igarashi are the right folks for the job. Sports junkies and fans of the Bamboo Blade anime may find something to like here, but rookies should avoid this team of losers.