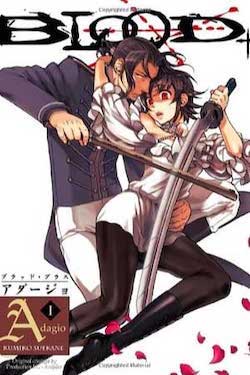 Forget what you know about the Russian Revolution. The real cause of the Romanov’s demise wasn’t growing unrest among the proletariat, or the high cost of World War I, or the famines of 1906 and 1911, but something far more sinister: vampires. At least, that’s the central thesis of Blood+ Adagio, a prequel to the popular anime/manga series about an immortal, vampire-slaying schoolgirl and her handsome, enigmatic handler. The first volume of Adagio transplants Saya and Hagi from the steamy jungles of present-day Okinawa and Vietnam — where they’ve battled US military forces and the myserious Cinq Flèches Group — to the chilly halls of Nicholas II’s Winter Palace in St. Petersburg — where they discover a nest of Chiropterans as well as a host of schemers, sycophants, and crazy folk in the tsar’s orbit.

Russophiles will balk at the liberties that artist/author Kumiko Suekane has taken with historical fact, such as transforming Rasputin from a bearded monstrosity into a clean-shaven hottie and introducing Sergei Shupukin, a fictional general who supposedly rose from peasant stock to become Nicholas II’s most trusted military advisor. As preposterous as some of these decisions may seem, however, they work surprisingly well, creating a delirious atmosphere that captures the Romanov’s desperate, semi-debauched state in 1916. One could almost — almost — believe that vampires prowled the halls of the Winter Palace under Rasputin’s protection.

What doesn’t work so well is the actual story. Few characters receive a proper introduction; we’re simply thrown into the action and left to our own devices to decide which ones are central to the drama and which ones are peripheral, a process unnecessarily complicated by some unfunny comic business in the opening pages. More frustrating is how poorly the historical elements are incorporated into the storyline, as two rooted-in-fact subplots — the tsarevich’s hemophilia and Rasputin’s cult following — receive only cursory treatment, never rising beyond the level of period window dressing.

Frustrating as the story may be, Kumiko Suekane’s artwork is clean and stylish, capturing the opulence of the Romanov lifestyle through elaborate costumes, hairstyles, and personal affects. Her character designs closely resemble Chizu Hashii’s originals, though they’re a little softer and more sensuous than the angular figures from the Blood+ anime — a good thing, in my opinion, as the characters’ faces are less mask-like and more expressive. Suekane stages the fight scenes competently, if not imaginatively, relying heavily on speedlines and close-ups of contorted faces to convey the intensity of the violence, sometimes obscuring where, exactly, her characters are standing in relation to one another.

Readers unfamiliar with the Blood+ series may find Adagio a confusing place to begin their journey, as the author presumes her audience is well-versed in the characters’ elaborate histories. Long-time fans, however, will find this an entertaining, if unevenly executed, story that should satisfy their urge to see Saya and Hagi’s slow-simmering romance continued.