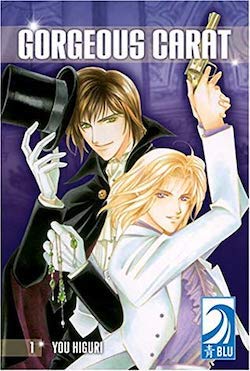 Gorgeous Carat caught my eye because it looked like a frothy costume drama. I’m a total sucker for that kind of thing, especially if it involves beautiful people fighting and falling in love in fancy surroundings. Alas, what I’d hoped would be a pleasant bit of escapism turned out to be so problematic in its presentation of gender, sexuality, and race that I never got swept up in its embrace.

The premise is ridiculous, but the first volume has a certain flair that carries Carat past its credulity-straining aspects. Our hero, Florian Rochefort, belongs to a French family with a noble name and and not-so-noble debt load. Rather than fence the family jewels, Florian’s mother does what all self-respecting French aristocrats do in yaoi manga: she sells Florian into slavery, delivering him to Ray Balzac Courtland, a distant relative who also happens to be, natch, young and handsome. Florian may be too dense to recognize his growing attraction to Ray, but it doesn’t take long for Florian to realize that Ray is, in fact, “Noir,” a cat burglar who’s the talk of fin-de-siecle Paris. When Florian is kidnapped by a rival gang of thieves, Ray sails for Morocco to enlist an old friend in tracking down his prized possession relative.

Elegant men in elegant costumes hopscotching across Europe and North Africa in pursuit of treasure: sounds good, no? Alas, You Higuri’s beautiful artwork can’t disguise the fact that her vision of North Africa is steeped in the same colonialist attitudes as Salammbo — not exactly an unimpeachable source of information about the Middle East. Take, for example, Laila, one of the key supporting characters in the Carat cast. Laila is Ray’s gal Friday, helping him track down information, cooking him meals, and keeping his car’s engine running whenever he sets out on a mission that might require a quick getaway. She might be a harmless character if it weren’t for Higuri’s decision to make Laila a dark-skinned Moroccan wearing a midriff baring costume.

Though we’re meant to see Laila as plucky, she has an ugly, Pygmalion-esque backstory (Courland rescued her from the streets when she was a girl and taught her to read) and is depicted as all-too-eager to do her master’s bidding. More disturbing is the way in which she competes with the fair-skinned Florian for her master’s attention. She throws temper tantrums, rages at Florian, tries seducing Ray, and, when none of that works, concedes that Florian has the superior claim on Ray’s heart. In fairness to Higuri, I think Laila is intended to be a surrogate for Carat’s female readers—a kind of wink-wink to readers wishing that Ray or Florian harbored romantic feelings for women. Instead, Laila comes across a tempestuous child-servant—a Steppin’ Fetchit for the Britney Spears era.

Equally troubling is the kidnapped-by-a-sexy-sheik subplot in the second volume. Florian becomes a pawn in an ugly contest between Ray and Azura, a mysterious Moroccan who—naturally—is impossibly and exotically beautiful himself. I got the same queasy feeling reading these pages as I did watching the implied rape scene in Lawrence of Arabia. Much is made of Florian’s fair, virginal beauty, just as Jose Ferrer fawns over Peter O’Toole’s blue eyes, pale skin, and sexual innocence. But while David Lean shows us the terrible ramifications of this encounter, Higuri includes these scenes in Carat for pure titillation. Yes, she hints that Azura may have “ruined” Florian, but given the series’ Harlequin romance plotting, it’s a safe bet that the lasting impact of Florian’s imprisonment will be bringing him closer to Ray, not sending him into, say, an irreversible tail spin of drug addiction and prostitution. (Though, of course, Higuri does inflict amnesia and temporary insanity on Florian for most of volume three.)

In Higuri’s defense, I doubt she knew much, if anything, about the imperialist discourse that shaped European attitudes towards the “Orient.” Yet she rehearses many of the stereotypes prevalent in nineteenth-century European art, literature, and scholarship about the Middle East, portraying Laila and Azura as irrational, childlike, and dangerously sensual — just as Flaubert portrays his Carthaginian princess. About the best I can say for Higuri is that she’s so committed to her story and characters that Gorgeous Carat almost works as a parody of Delacroix, Flaubert, and Massenet. Good thing Edward Said never picked up a copy.