In a 2009 interview with Tokyo Scum Brigade, Kazuo Umezu acknowledged that his debt to Osamu Tezuka went beyond storyboarding and character designs. Tezuka “didn’t pull any punches for children or dumb down his works,” Umezu explained. “He dealt with complicated themes and let the readers work it out on their own.” The 1972 classic The Drifting Classroom reveals just how profoundly Umezu absorbed this lesson. Though it ran in Weekly Shonen Sunday, a magazine aimed at grade schoolers, Umezu’s work was bleak, subversive, and weirdly thrilling, depicting a nightmarish world where kids resorted to violence and deception to survive.

The Drifting Classroom begins with a freak accident in which a rift in the space-time continuum sends the Yamato Elementary School and its occupants into the distant future. Initially, the students and teachers believe that they are the sole survivors of a devastating nuclear attack, and the area immediately surrounding the school supports their hypothesis: it’s a barren wasteland with no water, plants, or signs of human habitation save a pile or two or non-degradable trash. As the school’s occupants realize the severity of the crisis, panic sets in. Teachers and students engage in a brutal competition for dwindling supplies while attempting to solve the mystery of what happened to them. And when I say “brutal,” I mean it: the body count in volume one is astonishing, with murders, mass suicides, fist fights, knife fights, and rampaging monsters culling the herd at a breathtaking rate.

It’s sorely tempting to compare The Drifting Classroom to The Lord of the Flies, as both stories depict school children creating their own societies in the absence of adult authority. But Kazuo Umezu’s series is more sinister than Golding’s novel, as Classroom‘s youthful survivors have been forced to band together to defend themselves against their former teachers, many of whom have become unhinged at the realization that they may never return to the present. Umezu creates an atmosphere of almost unbearable dread that conveys both the hopelessness of the children’s situation and their terror at being abandoned by the grown-ups, a point underscored by one student’s observation that adults “depend on logic and reason to deal with things.” He continues:

When something happens and they can’t use reason or logic to explain it, they can’t handle it. I don’t think they were able to accept that we’ve traveled to the future. You know how adults are always saying that kids are making things up? It’s because they only know things to be one way. Kids can imagine all kinds of possibilities. That’s why we’ve managed to survive here.

That speech is delivered by The Drifting Classroom‘s plucky protagonist Sho, a sixth grader who becomes the children’s de facto leader. When we first meet Sho, he’s behaving petulantly, pouting over his mother’s decision to throw away his marbles. The intensity of his anger is drawn in broad strokes, but it firmly establishes him as an honest-to-goodness ten year old, caught between his desire to play and his parents’ desire to mold him into a responsible teenager. Once transported to the future, Sho’s strategies for scavenging supplies or subduing a rampaging teacher are astute but not adult; there are flourishes of imagination and kid logic guiding his actions that remind us just how young and vulnerable he is. As a result, Sho’s pain at being separated from his parents, and of losing his comrades, is genuinely agonizing. 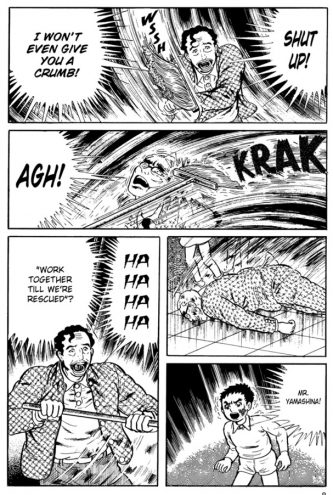 Umezu’s artwork further emphasizes the precarity of Sho’s situation. Sho and his classmates have doll-like faces and awkwardly proportioned bodies that harken back to Umezu’s work for shojo magazines such as Sho-Comi and Shoujo Friend, yet their somewhat unnatural appearance serves a vital dramatic function, underscoring how small they are when contrasted with their adult guardians. The adults, on the other hand, initially appear normal, but descend into monstrous or feckless caricatures as their plight becomes more desperate. Only Sho’s mother—who is stuck in the present day—escapes such unflattering treatment, a testament to her devotion, courage, and imagination; while her husband and friends have accepted the official story about the school’s fate, Sho’s mother is open to the possibility that Sho may be reaching across time to communicate with her.

Like his character designs, Umezu’s landscapes are willfully ugly, evoking feelings of disgust, fear, and anxiety that are almost palpable, whether he’s drawing an abandoned building or a garden filled with grotesquely misshapen plants. The area just outside the school gates, for example, resembles the slopes of an active volcano, with sulfurous clouds wafting over a rocky expanse that seems both frozen and molten—an apt metaphor the characters’ state of mind as they first glimpse their new surroundings: 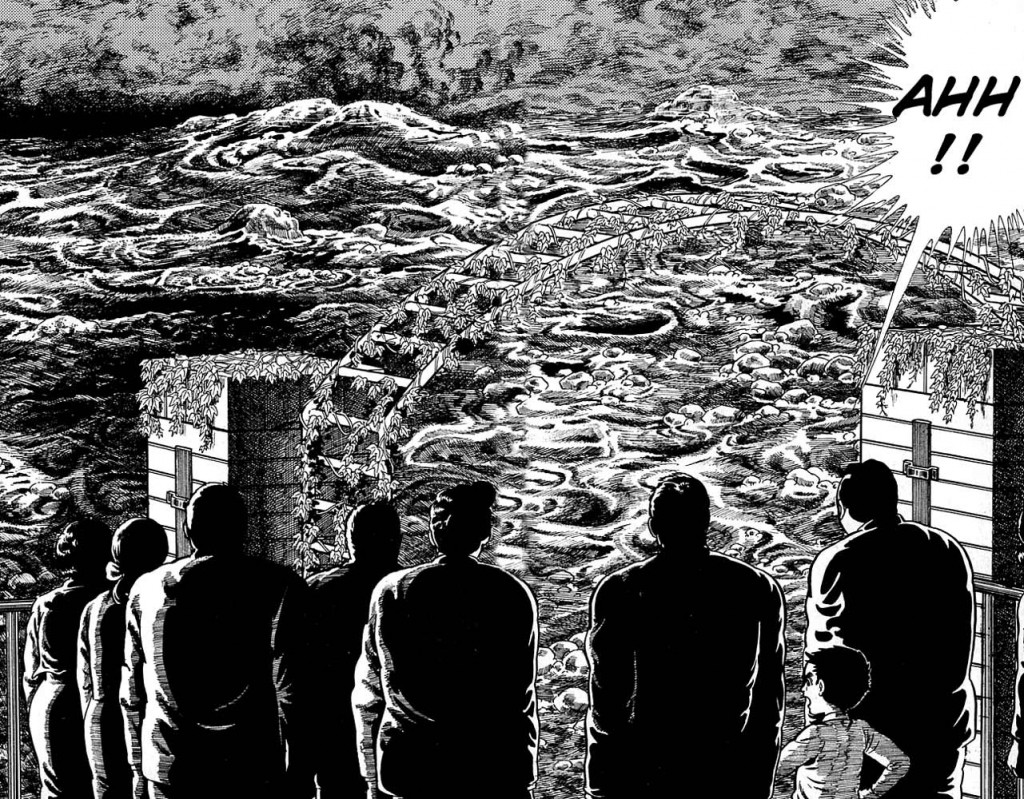 Though The Drifting Classroom‘s imagery still resonates in 2019, its gender politics do not, as an egregious subplot involving a sadistic girl gang demonstrates. When the gang attempts to seize control of the school, a classmate urges Sho to oppose them on the grounds that girls are fundamentally unsuited for leadership roles. (“Women are made to give birth and rear children so they can’t think long term,” Gamo helpfully opines.) Umezu’s goal here, I think, is to suggest that girls are as capable of violence and cruelty as boys, but the dialogue suggests the gang’s behavior is a symptom of innate irrationality instead of a genuine and logical response to a desperate situation. Making matters worse is that the few sympathetic female characters are consigned to stereotypically feminine roles that give them little to do besides scream, run, and comfort the younger children; even Sakiko, the smartest girl in the class, never gets a chance to solve a problem or offer a useful opinion.

Yet for all its obvious shortcomings, The Drifting Classroom is a thoughtful meditation on adult hypocrisy, exposing all the ways that adults manipulate and terrorize children for their own convenience. “Adults are humans, children are animals,” a cafeteria worker tells Sho and his friends. “That’s why adults have the power of life and death over kids.” That Sho and his followers cling to their humanity despite the adults’ selfish behavior reminds us that children are innocent but not naive; Sho and his friends are clear-eyed about their teachers’ failings, yet choose to persevere. Recommended.

This is a greatly expanded–and reconsidered–review of The Drifting Classroom that appeared at PopCultureShock in 2006. VIZ Media provided a review copy. Read a free preview here.

One thought on “The Drifting Classroom Signature Edition, Vol. 1”