If you’ve been jonesing for a stylish thriller that doesn’t take itself too seriously, Eldo Yoshimizu’s Ryuko might just fit the bill: it has the pulpy soul of a Kazuo Koike manga and the brash attitude of a James Bond flick. And while Ryuko never quite achieves the simmering intensity or cohesion of Lady Snowblood and Crying Freeman, it does hold its own against Koike’s best work thanks to its audacious action sequences and cool-as-ice heroine who’ll stop at nothing to avenge her mother’s kidnapping.

Running in tandem with the kidnapping storyline are four —maybe five — other subplots, all connected to the Soviet-Afghanistan war. There’s gun-running and opium harvesting, Soviet malfeasance and CIA chicanery, and some other elements that, frankly, don’t make a lot of sense, though they provide sufficient justification for the imaginatively staged combat. Anyone hoping for a few helpful lines of expository dialogue will be frustrated, as the characters are so laconic they seldom utter more than a few words before throwing a punch or brandishing a gun.

The real star of Ryuko is Eldo Yoshimizu’s artwork, which deftly synthesizes Japanese and European influences without slavishly copying them. His female characters, in particular, have the undulating hips, flowing locks, and determined scowls of Leiji Matsumoto’s most lethal heroines, while the male characters’ appearances owe a debt to the rugged manly-men that stalked the pages of Hugo Pratt, Takao Sato, and Goseki Kojima’s adventure stories. Not surprisingly, Yoshimizu lavishes his greatest attention on Ryuko, (un)dressing her like a paper doll with a penchant for leather suits and plunging necklines; she and her female foot soldiers spend almost as much time fighting enemies in the buff as Oyuki does in Lady Snowblood.

But oh, those fight scenes! They’re worth the price of admission, as they showcase the full range of Yoshimizu’s talents as a draftsman, veering sharply between naturalism, suggestion, and pure abstraction. In this sequence, for example, we see the young Ryuko ambushing a group of Soviet soldiers: 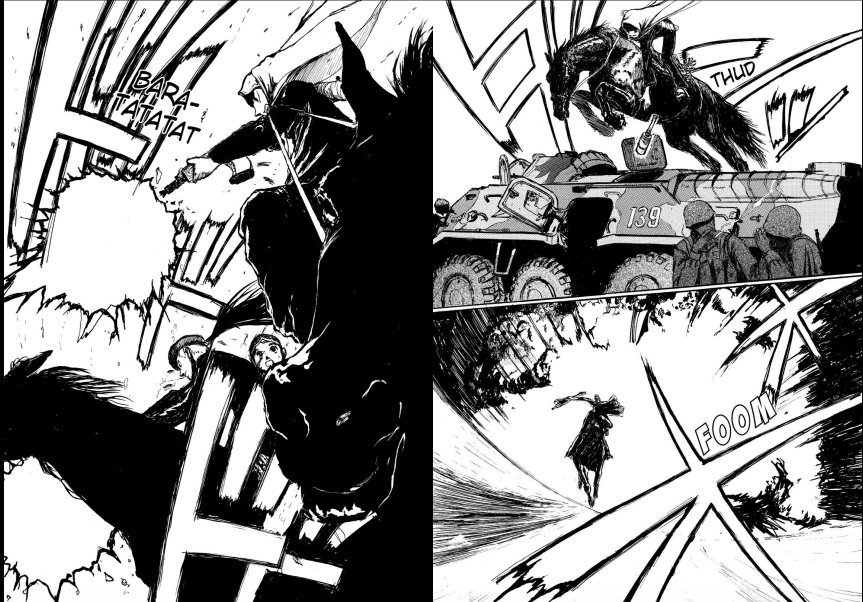 In the first panel, the tank is drawn with utmost specificity, allowing us to appreciate its sheer mass and its weaponry. The subsequent panels, however, are more gestural than the first, as we glimpse Ryuko silhouetted against the explosion, her age and gender completely obscured by the brilliant flash of light behind her. In the final panel of the sequence, Yoshimizu uses two horses to frame the action, rendering them as bold patches of black, with just a suggestion of a nostril and an eye, their demonic appearance echoing Ryuko’s own fierce resolve.

Other sequences, such as this one, are even more abstract, dispensing with a grid in favor of fluid, overlapping images; in a particularly effective gambit, Ryuko’s arm forms a kind of panel boundary between the first stage of the attack — a knee to the stomach — and the second, in which she flips and pins her opponent: 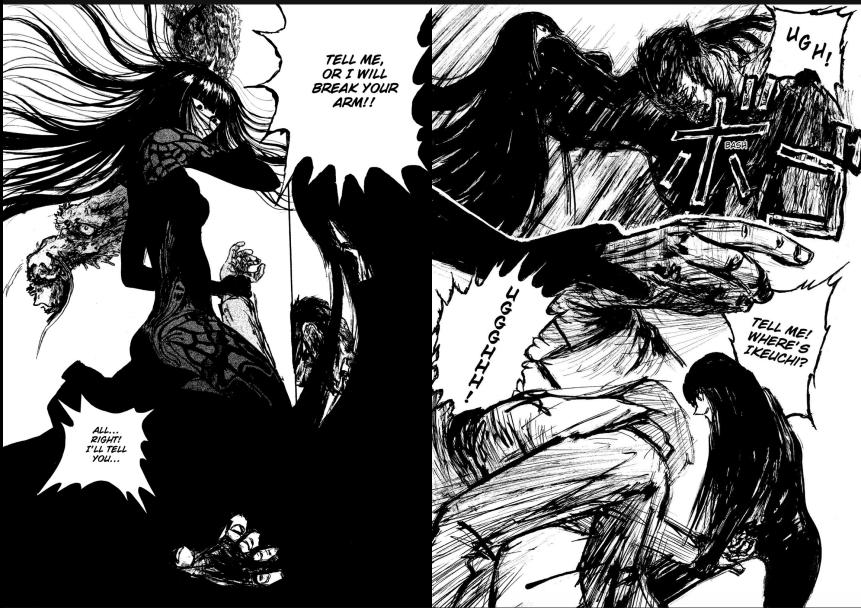 Even Ryuko’s hair plays an important role in helping us understand what’s happening in this confrontation. In the first sequence, her hair swings around her face and shoulders in a naturalistic fashion, but in the final panel, her hair looks like a furious nest of snakes, each poised to strike her victim. That shift is subtle but important, a nifty metaphor for just how quick and lethal Ryuko can be.

For all the verve with which these scenes are drawn, Ryuko‘s characters never quite register as flesh-and-blood people. Yoshimizu has provided them with backstories, but the characters’ behavior is so steeped in action-movie cliche that their motivations for shooting and punching are almost immaterial. The story’s breakneck pacing doesn’t allow anyone much time for introspection, either; the few flashbacks to Ryuko’s childhood separation from her mother are the only genuinely emotional moments in the story.

Still, no one reads trashy thrillers for a deep exploration of the human psyche; they’re looking for an over-the-top story that serves up generous helpings of car chases, gun battles, and fist-fights, the more outlandish, the better. On that front, Ryuko performs admirably, infusing a shopworn revenge plot with the sensual swagger of old-school classics like Lady Snowblood and Lupin III. Recommended.