It’s been a while since I added a new Shonen Jump title to my pull list. Don’t get me wrong: I love One-Punch Man and The Promised Neverland, but I find that many shonen titles overstay their welcome (usually around the fourth or fifth tournament arc). Still, it’s hard to resist the allure of a great shonen series, especially if it has snazzy art and a great hook, so I decided to check out two recent debuts: Black Torch and Demon Slayer: Kimetsu no Yaba, both of which draw inspiration from Japanese folklore. 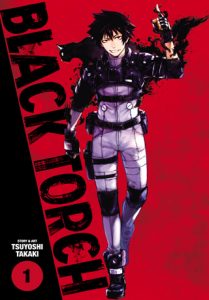 Black Torch suffers from an unusual problem: it has a terrific introductory chapter with emotionally resonant scenes, followed by two chapters that seem stale in comparison.

The opening pages introduce us to Jiro Azuma, a sensitive young man who has an unusual talent: he can hear animals’ thoughts. At the urging of his childhood dog, Jiro uses his gift to help animals in need, whether it’s a crow hassled by people or a kitten trapped in a tree. A chance encounter with a wounded mononoke, however, turns his life upside down, pitting him against his grandfather, a ninja with serious monster-hunting skillz. Alas, the revelation that gramps belonged to the Oniwabanshu, a top-secret government agency that kills demons, pushes the story in a more obvious, less interesting direction. These scenes hit all-too-familiar beats as the bureau’s mission and personnel are fleshed out, one antagonistic exchange at a time. Only the fight sequences provide relief from these info-dump conversations; they’re briskly choreographed affairs, notable both for their inventive use of perspective and sparing use of screen tone, speed lines, and sound effects. The same crisp, minimalist approach informs the character designs, giving Black Torch a distinctive look that’s not fully matched by its Tokyo Ghoul-by-way-of-Bleach plotting. Your mileage may vary. 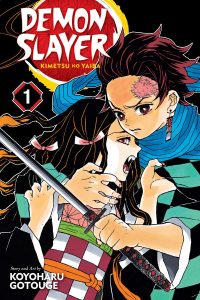 Demon Slayer‘s plot is set in motion by a tragedy: the hero returns home from an errand only to discover that a demon slaughtered his family. One sibling clings to life but shows signs of becoming a demon herself, putting Tanjiro in a terrible bind: should he kill her now, or risk being killed in a week, a month or a year when her transformation is complete? Though the series’ dark tone feels au courant, in keeping with Jump Plus titles like Fire Punch, Koyoharu Gotouge’s line work and character designs are pleasingly retro, the kind of art you might have found in a Reagan-era issue of Weekly Shonen Jump. Gotouge’s bodies and heads are sometimes a little awkwardly drawn, and his demons too obviously fashioned from screen tone, but the artwork’s lack of polish makes Tanjiro seem more vulnerable when confronting monsters that are bigger, meaner, and more cunning than he is. I’m not sure that Demon Slayer is headed anywhere new, but Tanjiro is the kind of hero I’d like to see more often: a frightened but determined character who seems like a real person confronting the impossible, rather than a resolutely optimistic kid whose pluck carries the day. Recommended.