There was a moment in the early 2000s when Tokyopop slapped the “manga” label on just about anything it published, from licensed Japanese comics to comics made by aspiring American artists who were trying to break into the industry. Looking back on the heated debate over the legitimacy of OEL manga, I wonder how today’s readers will view RWBY, a work that meets the basic definition of manga as “comics created in Japan,” but has a more complicated history than other American properties that have been reimagined for Japanese readers.

RWBY’s path to the Shonen Jump imprint began in 2013 when Rooster Teeth, an American production studio, had a viral hit with an original, anime-influenced show about a team of girls who fight monsters. Over the next four years, interest in RWBY was strong enough to inspire a spin-off series, a video game, four soundtrack albums, and a manga illustrated by Shirow Miwa, creator of Dogs and Dogs: Bullets & Carnage. Like Miwa’s other work, RWBY ran in the pages of Ultra Jump alongside JoJo’s Bizarre Adventure and Bastard!! before being licensed by VIZ for American readers.

Flipping through its pages, there are hints that RWBY is a slightly different animal than Jiro Kuwata’s Bat-Manga or Kia Asamiya’s Star Wars: The Phantom Menace. RWBY reads like a skillful imitation of a battle-heavy shonen manga, a riot of flying fists, kicking legs, swinging scythes, and extreme camera angles. Almost every imaginable visual cliche is on display, from a girl with cat-ears (she’s a Faunus, or a “therianthrope”) to a school uniform that consists of a waist-nipping blazer and impossibly short skirt. And while Miwa’s artistic persona is evident in the story’s best pages, RWBY feels less like a manga adaptation of a popular American show than a compendium of things that American fans like about anime and manga.

The story follows a familiar template: four — or three, or five — special teens attend a special school where they learn how to use their special powers to defend the Earth from demons or aliens. Each teen has one unusual gift — say, teleporting or making killer bento boxes — and one well-defined personality trait that dictates the costume she wears, how much she talks, and whether she plays well with others. Though individually effective, the quartet — or trio, or quintet — is more formidable when they team up against their shared enemy, a lesson that’s reinforced early and often in the series both in the outcome of the battle scenes and in the characters’ on-the-nose conversations about friendship and cooperation. In RWBY, the principal team consists of four girls: Ruby Rose, a weapons expert, Weiss Schnee, a rich girl, Blake Belladonna, a former gang member, and Yang Xiao Long, a cheerful spazz who loves a good brawl. All four attend attend Beacon Academy, where teens train to become Hunters, skillful warriors who wield cool weapons and magical spells against the Grimm, a race of “soulless monsters” that threaten humanity’s existence.

On the screen, such a shopworn premise could still work with the addition of snazzy animation, strong voice acting, great sound design, and judicious pacing. On the page, however, RWBY falls flat. Miwa is hamstrung by the pedestrian source material, cranking out a manga whose principal characters are blandly pretty and prone to explaining things to one another. Just a few pages into chapter one, for example, Ruby blithely asks her teammates about Dust, the magical substance that powers their weapons. Without missing a beat, Schnee responds, “It’s a crystallized energy propellant that helps to power our world.” She then launches into a lengthy rumination on Dust that’s supposed to reveal something about her character — her family’s fortune is tied to Dust — but is such a poorly disguised information dump that it never rises to the level of conversation.

Glimpses of Miwa’s signature style — his sharp-featured characters and spidery linework — emerge most clearly in the battle sequences, when Ruby and friends face off with the Grimm. Miwa frames the action in panels whose bold, diagonal boundaries mimic the combatants’ slashing motions and flying leaps. In one of the manga’s most striking sequences, Miwa traces a bullet from the barrel of Ruby’s gun towards its target. This kind of tracking shot is a hackneyed gesture, but Miwa does something playful and surprising with it: he breaks the frame to create the illusion that the bullet is emerging from the page and whizzing past the reader: 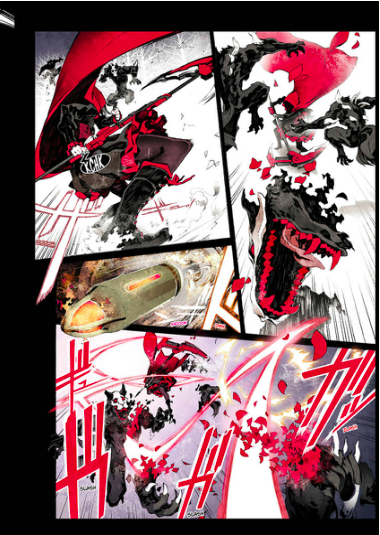 The rest of the sequence, however, is a hot mess. Miwa’s relentless shift in perspective makes the fight as incomprehensible as a badly edited car chase; it’s never clear how many monsters are involved, or what makes the Grimm so lethal, despite the fact that Miwa has tried to mimic the show’s swooping camera work to show the carnage from every possible angle.

Miwa’s indifference to the material also manifests itself in the almost total absence of background detail. Though he introduces the fight sequences with an establishing shot or two — a glimpse of trees, an aerial view of a railroad track — the action unfolds in blank space. Plenty of manga-ka take similar shortcuts, but when a manga is 70% combat and 30% character-building, the effect is like looking at a scene from The Last Jedi or Avatar before the special effects were added; in the absence of any objects, buildings, or landmarks that would contextualize their actions and words, the characters look downright silly.

Part of me wishes RWBY were better, as it’s fascinating to see an American program get the manga treatment, especially one that wears its Bleach and Magic Knight Rayearth influences on its sleeve. Ten years ago, fans would have derided such a program as inauthentic; today, it seems, such trans-Pacific exchanges are unremarkable. Too bad RWBY never escapes the prison of Overused Anime and Manga Tropes to become something more original, compelling, or entertaining.