I have a special fascination with bad manga. And when I say “bad manga,” I’m not talking about stories that are merely cliche or derivative of other, better series — for better or worse, manga is a popular medium, and popular media survive, in part, by giving audiences what they want, even if that means more of the same — I’m talking about stories so ineptly drawn, so spectacularly dumb, or so offensive that they make Happy Cafe look like Phoenix by comparison. To judge from the coverage of this year’s San Diego Comic-Con, I’m not alone in my connoisseurship of wretched books; among the most widely reported panels was The Best and Worst Manga of 2010, in which a group of seasoned reviewers singled out titles for praise and punishment. To kick off my Bad Manga Week, therefore, I thought it would be a fun exercise to look at three of the titles that made the worst-of list to see if they were truly suited for inclusion in The Manga Hall of Shame. The candidates: Orange Planet (Del Rey), a shojo farce starring one clueless girl and three hot guys; Red Hot Chili Samurai (Tokyopop), a comedy about a hero who favors spicy peppers over PowerBars whenever he needs an energy boost; and Togainu no Chi (Tokyopop), an action-thriller that proudly boasts its origins as a “ground-breaking bishonen game.” 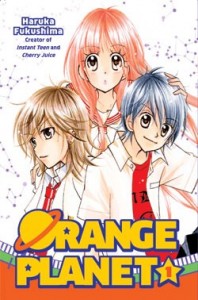 Haruka Fukushima specializes in what I call “chastely dirty” manga for tween girls — that is, manga that places the heroine in compromising situations, teasing the audience with the prospect of a kiss or a grope that never quite materializes because the heroine is a good girl, thank you very much. In Orange Planet, Fukushima’s sex-phobic lead is Rui, a junior high student who lives by herself — she’s been an orphan since childhood — and pays for her apartment with a paper route. (That must be some paper route, considering she lives in a modern high-rise apartment and not, say, a cardboard box.) Rui is one corner of a highly contrived love square; the other three points are all standard shojo types, from the boy next door and the hot young teacher to the mystery man from the heroine’s past.

Why any of them find her interesting is one of Orange Planet‘s great puzzles; Rui is ditzy, hysterical, and prudish, three qualities that men of all ages generally dislike in female companions. Why Rui would find any of them attractive is the series’ other, as all three boys behave like boors, popping into her bed unannounced (yes, you read that right) and offering her private “tutoring” sessions. The art is less offensive than the story, evocative of Natsumi Ando’s far better Kitchen Princess with its cast of pointy-chinned, doll-eyed characters and sparkling, rose-filled backdrops. The layouts are sloppily executed, careening from panels of awkwardly-posed bodies to extreme closeups of Rui looking terrified that one of the boys might actually lean in for a kiss. Maybe I would have found Orange Planet titillating when I was eleven or twelve, but I’d like to think that I was never quite that clueless about boys. Just sayin’.

Shameworthiness: Orange Planet earns a place in The Manga Hall of Shame for insulting girls’ intelligence with a wish-fulfillment story so slapdash it’s painful. 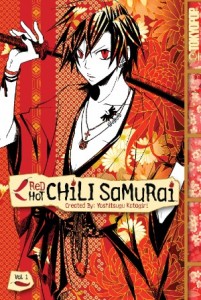 If you crossed Popeye with Samurai Champloo, the results might look a lot like Red Hot Chili Samurai, a labored comedy about a hot-headed swordsman who snacks on peppers — the spicier, the better — to turbo-charge his combat skills. Like all good heroes, Kokaku has a posse of fellow butt-kickers that includes Ento, a sarcastic samurai in glasses; Ran, a feisty woman who vacillates between thinking Kokaku is cute and thinking he’s an ass; and Shou, a ninja who communicates exclusively through handwritten signs, a la Louis in The Trumpet of the Swan. The four tackle an assortment of stock villains, from a yakuza thug who runs a crooked gambling parlor to a pimp who preys on vulnerable young women. Each story follows the same basic template, serving up a predictable mixture of jokes about Shou’s reluctance to speak and Kokaku’s fixation with chili peppers (“Maybe you should give those things up,” one character tells him, “You’ll get hemorrhoids, you know.”), as well as anachronistic sight gags (one character invents a Polaroid-style camera) and scratching-the-fourth-wall observations about samurai manga conventions. Clumsy, speedline-heavy fight scenes and character designs that suggest Champloo doujinshi only reinforce the bad impression left by the script, which is filled with long, airless pauses that precede every joke or snappy comeback. Take my samurai — please!

Shameworthiness: Red Hot Chili Samurai is dull and repetitive to be sure, and poorly drawn to boot, but isn’t quite cringe-worthy enough to merit inclusion in The Manga Hall of Shame’s permanent collection. 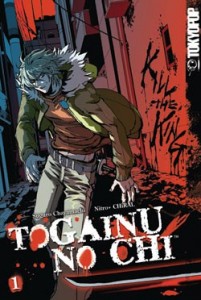 Here are seven words that ought to strike fear into every manga reader’s heart: “Based on the ground-breaking bishonen game!” Not only is the tagline vague — what kind of game? how are bishonen involved? what makes it ground-breaking? — but it also suggests that the editorial staff couldn’t think of anything positive to say about a sci-fi adventure that ought, in theory, to appeal to folks who liked Battle Royale. Alas, Togainu no Chi plays like an ungainly mixture of slash fiction and Deadman Wonderland, depositing its pretty, vacant heroes into a future run by gangs who sponsor elaborate street-fighting tournaments. The post-apocalyptic setting is suggested primarily through dark, overly toned streetscapes filled with rubbish and crumbling pavement; one could be forgiven for thinking the story takes place somewhere under the Cross-Bronx Expressway and not a Japanese city circa “20XX A.D.” In fact, nothing about the setting really suggests the future, near or distant, save for a few cliche visual signifiers: sword-wielding characters in trenchcoats, bad guys with enormous tattoos and multiple piercings, the complete absence of daylight. The action sequences are as poorly executed as the backgrounds, a confusing mishmash of blood spatters and facial close-ups (usually as someone is yelling “Noooooo….”), while the dialogue see-saws between manly, expletive-laden exchanges and exposition-heavy speeches. Perhaps Togainu no Chi‘s biggest offense is the laziness of the storytelling; the author frequently interrupts the narrative to explain the rules of The Igura (the tournament at the heart of the story), yet it’s still not clear by the end of volume one how the game is actually played, though it does involve dog tags and playing cards. Or something like that.

About the best I can say for Togainu no Chi is that the menfolk are generically handsome, providing fanfic writers ample opportunity to pair the boys off for some manly adventures followed by some sweet, sweet lovin’.

Shameworthiness: Move that Picasso to the left — this one needs a space in the permanent Manga Hall of Shame gallery.