I pity the poor critic who panned Up — it’s not fun to buck the tide of critical approbation, especially when it seems like everyone else is wholeheartedly embracing the film or book in question. I say this because my best-of-2009 list is missing two titles that I’ve seen on many others: Yoshihiro Tatsumi’s A Drifting Life and Fumi Yoshinaga’s Ooku: The Inner Chambers. The first, I’ll admit, is a beautifully crafted book, proof that manga can be a great medium for biography. Yet for all its artistry, I found A Drifting Life oddly uninvolving; too many chapters read more like historical pageants than personal drama. The second title I found more problematic. Yoshinaga starts from a humdinger of a premise, inverting the social order of Tokugawa Japan by placing women in charge of everything. Yoshinaga never fulfills the promise of her idea, however, saddling her narrative with long-winded conversations that are both tin-eared and dull, two adjectives I never thought I’d be applying to Yoshinaga’s work.

Equal parts Iron Wok Jan, Mostly Martha, and The Manga Cookbook, this educational, entertaining series explores Japanese cuisine at its most refined — sake, seabream sashimi — and its most basic — rice, pub food. The stories fall into two categories: stories celebrating the important role of food in creating community, and stories celebrating the culinary expertise of its principal characters, newspaperman Yamaoka Shiro and his curmudgeonly father Kaibara Yuzan. (Fun fact: Yuzan is such a food snob that he drove Yamaoka’s mother to an early grave, causing an irreparable break between father and son.) Though the competition between Yamaoka and Yuzan yields some elegant, mouth-watering dishes, Oishinbo is at its best when it focuses on everyday food in everyday settings, shedding light on how the Japanese prepare everything from bean sprouts to ramen. Warning: never read on an empty stomach! (Click here for my review of Oishinbo A la Carte: Japanese Cuisine; click here for my review of Oishinbo A la Carte: Vegetables.)

Satirizing death metal is a bit like shooting fish in a barrel: how hard can it be to parody a style associated with bands named Cannibal Corpse or Necrophagia? Poking fun at death metal while respecting the sincerity of its followers, however, is a much more difficult trick to pull off. Yet Kiminori Wakasugi does just that in Detroit Metal City, ridiculing the music — the violent lyrics, the crudely sexual theatrics — while recognizing the depth of DMC fans’ commitment to the metal lifestyle. Though the musical parodies are hilarious, the series’ funniest moments arise from classic fish-out-of-water situations: Negishi driving a tractor on his parent’s farm while dressed as alter ego Lord Krauser (complete with make-up, fright wig, and platform boots), Negishi bringing a fruit basket to a hospitalized DMC fan while dressed as Krauser… you get the idea. Rude, raunchy, and quite possibly the funniest title VIZ has licensed since Even a Monkey Can Draw Manga. (Click here for my review of volume one; click here for my review of volumes two and three.)

In the twenty years since Itazura Na Kiss first appeared in Margaret, Kaoru Tada’s breezy romantic comedy has been widely imitated, but seldom surpassed. The story is as basic as they come: an airhead falls in love with a genius, is rebuffed by him, and is eventually pursued by him when he realizes just how sincere and kind she is. Tada manufactures a ridiculous situation to bring her characters together under the same roof — earthquake ahoy! — yet the story never devolves into brainless sitcom territory, thanks to her large supporting cast of characters, brisk comic timing, and strategic use of humor to reveal the characters’ true natures. Pure shojo bliss. (Click here for my review of volume one.)

Every elementary school has a kid like Yuki, a smart, odd student who says things that unsettle classmates and teachers alike. In Yuki’s case, it’s the matter-of-fact way he reports seeing monsters that leads to his social isolation. Newcomer Makoto doesn’t share Yuki’s vision, but he admires Yuki’s nonchalant attitude, and struggles mightily to understand what makes his friend tick. It’s to Taiyo Matsumoto’s credit that we’re never entirely sure what aspects of the story are intended to be real, and which ones might be unfolding in the characters’ heads; Yuki’s monsters remain largely unseen, though their presence is felt throughout the story. Matsumoto’s stark, primitive style suits the material perfectly, inoculating Gogo Monster against the sentimentality that imaginary friends and childhood fears inspire in so many authors.

Had the Bronte sisters been born in twentieth-century Japan instead of nineteenth-century England, they might have penned something along the lines of The Name of the Flower, a tear-jerker about a young woman who falls in love with her guardian. Ken Saito employs many favorite Victorian tropes — muteness, garden imagery, orphans — in service of the plot, creating an atmosphere of palpable yearning that will be familiar to anyone who’s read Jane Eyre or Wuthering Heights. For all of its Victorian window-dressing, however, The Name of the Flower favors a slice-of-life approach over crazy-wives-in-the-attic melodrama. (Well, almost; the main love interest is a misanthropic — but hot! — novelist who favors yukatas over jeans, is prone to fits of anger, and writes dark, pessimistic fiction.) Saito’s elegant, understated art is the perfect complement to this delicate drama, making good use of floral imagery to underscore the heroine’s emotional state. For my money, the best new shojo manga of 2009.

A Distant Neighborhood is a wry, wistful take on a tried-and-true premise: a salaryman is transported back in time to his high school days, and must decide whether to act on his knowledge of the past or let events unfold as they did before. We’ve seen this story many times at the multiplex — Back to the Future, Peggy Sue Got Married — but Taniguchi doesn’t play the set-up for laughs; rather, he uses Hiroshi’s predicament to underscore the challenges of family life and the awkwardness of adolescence. (Hiroshi is the same chronological age as his parents, giving him special insight into the vicissitudes of marriage, as well as the confidence to cope with teenage tribulations.) Easily one of the most emotional, most intimate stories Taniguchi’s ever told.

What amazes me the most about Naoki Urasawa is his ability to transform a tried-and-true genre like the whodunnit into a vehicle for exploring deeper questions about human nature, morality, and identity. As he did with the equally compelling Monster, Urasawa starts in familiar territory — in this case, a murder investigation — but quickly takes the story in unexpected directions, pausing to fill us in on the interior lives of both the principal and secondary characters — no mean feat, given that many cast members are, in fact, robots. Though Pluto takes its inspiration from “The Greatest Robot on Earth,” a short story within Osamu Tezuka’s long-running Astro Boy series, you don’t need to know anything about the original to appreciate the smart pacing, crisp artwork, or intelligent dialogue. In almost any other year, Pluto would have been my #1 pick; it’s a testament to the depth and breadth of 2009’s new releases that it isn’t.

Poignant is a word I seldom use to describe Junko Mizuno’s work, given the frequency with which her characters pop pills, wield chainsaws, and whip each other. But Little Fluffy Gigolo Pelu is poignant, a perversely sweet and sad meditation on one small, sheep-like alien’s efforts to find his place in the universe. In richly detailed images — if one can use the phrase “richly detailed” to describe artwork that draws its inspiration from Hello Kitty, My Little Pony, and Faster, Pussycat! Kill! Kill! — Mizuno offers one of the most bizarre, most original variations on that chick-lit staple, the quest to find a mate before one’s biological clock runs out. It’s not entirely clear how Mizuno expects her audience to react to Little Fluffy Gigolo Pelu — as a social satire? a tragedy? a Sanrio promotion? — but the clarity and appeal of her vision is undeniable. (Click here for my review of volume one.)

Through a series of ten vignettes, Red Snow depicts life in pre-industrial Japan, when men depended on the sea, the forest, and the field for their survival. Kappa and kitsune mingle freely with humans in Susumu Katsumata’s world, their presence treated as a matter of fact, rather than something extraordinary — a reflection of man’s close relationship with the natural world. Though Katsumata employs a self-consciously primitive style, the stories are neither bleak nor condescending towards their subjects; if anything, Katsumata’s drawings of farmers, woodcutters, and drunken monks have a rude vigor that reflects the resilience of his characters.

1. CHILDREN OF THE SEA (VIZ Media) 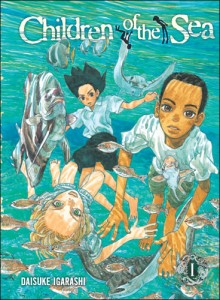 Children of the Sea defies easy categorization; it’s a high-seas adventure, an exploration of pan-Asian mythology, a cautionary tale about the environment, and a meditation on the ocean as a life-giving force. Though Children of the Sea could easily devolve into mystical hoo-ha — two of its characters were raised by dugongs, for Pete’s sake — Igarashi embeds a coming-of-age story within the main narrative that grounds Children of the Sea in everyday experience, even as the plot takes a turn for the fantastic. (See “raised by dugongs,” above.) Igarashi’s naturalistic art captures the beauty and strangeness of the ocean settings, as well as the sheer diversity of undersea life; you won’t soon forget the site of a sea turtle leaving a starry trail in its wake or the image of a young boy hitching a ride on a humpback whale. Eerie and poetic. (Click here for my review of volume one.)

Done because there are too menny… great manga, that is, to confine myself to a traditional top ten list. With apologies to Thomas Hardy, here are some of the other manga that tickled my fancy in 2009: