I read a Rumiko Takahashi manga for the same reason I watch an Alfred Hitchcock thriller: I know exactly what I’m going to get. Certain plot elements and motifs recur throughout each artist’s work — Hitchcock loves pairing a brittle blond with a rakish cad on the run from authorities, for example, while Takahashi loves pairing a female “seer” with a demonically-tinged boy — yet the craft with which Hitchcock and Takahashi develop such tropes prevents either artist’s work from feeling stale or repetitive. Takahashi’s latest series gives ample proof that while she may have a limited repertory, she’s the undisputed master of the supernatural mystery.

Sakura Mamiya and Rinne Rokudo, Rin-ne‘s oil-and-water leads, are a classic Takahashi pair: Sakura is a seemingly ordinary teenager with the ability to see ghosts, while Rinne is a hot-headed boy who’s part human and part shinigami. The two meet cute in Sakura’s tenth-grade classroom when Rinne arrives to claim his long-empty seat. “Looks like he made it,” Sakura whispers to a friend before realizing that she’s the only person who can see the tall, flame-haired boy in a fancy ceremonial robe. Sakura then watches Rinne  attempt to banish an enormous Chihuahua demon to the afterlife — an exorcism that goes horribly (and comically) awry when the dog’s spirit merges with the spirit of a love-starved teen. Now forced to contend with an even more powerful, angry ghost, Rinne uses Sakura to lure it to the Wheel of Reincarnation, an enormous portal that separates the material and spirit worlds. 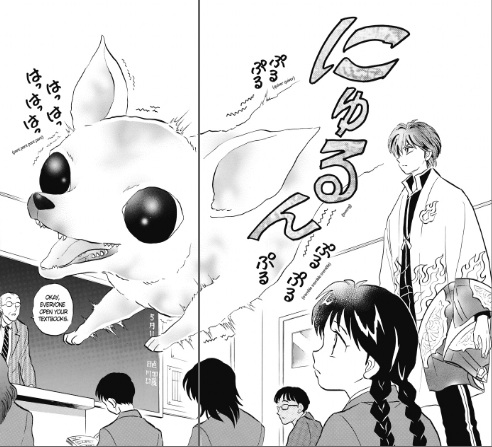 After their dramatic introduction, Sakura and Rinne forge a reluctant partnership. Sakura provides material assistance and ethical guidance to Rinne, while Rinne banishes the spirits that plague Sakura’s high school. Sakura soon learns that Rinne’s grandmother, a shinigami, fell in love with a young man whose spirit she was sent to collect. In exchange for extending his life by fifty years, Rinne’s grandmother agreed to “fulfill her shinigami duties at ten times her usual quota.” When she failed to reach that target, Rinne was forced to enter the family trade, operating on the fringes of both the human and spectral worlds with limited ability to function in either realm — hence his weak exorcism skills.

Where, exactly, Takahashi plans to take the story is still something of a mystery. As she did with InuYasha, she’s using the first few volumes to establish the premise, explain how the Wheel of Incarnation works, and develop the chemistry between her lead characters by subjecting them to a host of unhappy spirits. The first eight chapters have a pleasant, spook-of-the-week feeling, as Sakura and Rinne tangle with a ghostly cell phone caller, a damashigami (a shinigami who meets his quota by luring innocent people to their deaths), and an ochimusa (a disgraced warrior). At the same time, however, Takahashi is clearly laying the groundwork for a more extended storyline, introducing several supporting characters, leaving key questions about Sakura’s past unanswered, and creating space for a Naraku-esque villain to fill.

The first volume’s leisurely pace also allows Takahashi plenty of room to showcase her comedic talents. Though InuYasha, Mermaid Saga, and Rumic World have canted more strongly towards horror, Rin-ne is decidedly humorous, incorporating supernatural elements into everyday settings in delightfully absurd ways. Takahashi’s demon Chihuahua is a great example: the demon continues to behave like a nervous, short-haired toy even after it grows to enormous size, and remains susceptible to the savory appeal of milk bones. Rinne’s grandfather is another example of the supernatural made ridiculous; as Rinne’s grandmother wistfully notes, her husband was reincarnated as a mackerel — the destiny for which he was slated when she fell in love with him.

Though utterly enjoyable, Rin-ne has its flaws. Takahashi relies a little too heavily on interior monologues to cue us into what’s happening; Sakura is frequently called upon to mutter, “So that’s why no one can see him!” even when the illustrations make it plain that Rinne is invisible to humans when he dons his flame-patterned haori. Takahashi isn’t above recycling bits from other works, either; Rokumon, a familiar introduced in chapter six, bears a strong resemblance to InuYasha‘s Shippo in both appearance and plot function, comic relief in the form of a child-like animal spirit. Sakura, too, seems more like a Kagome clone than a character in her own right, though she’s a little edgier and more skeptical than her jewel-seeking predecessor.

Still, it’s hard to dismiss a manga that’s crafted with as much skill and good humor as Rin-ne. The story and characters may remind readers of other works in the Takahashi canon, but that strikes me as a good thing — yet another opportunity to spend time with the kind of spunky heroines, rash-but-kind heroes, and oddball supporting characters that give Takahashi’s work its distinctive flavor.

Review copy provided by VIZ Media, LLC. Volume one of Rin-ne will be available on October 20, 2009.