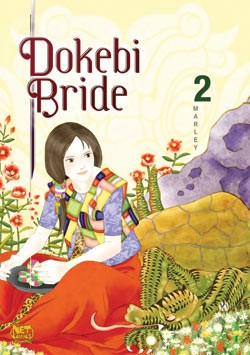 After visiting “Korean Comics: A Society Through Small Frames” last weekend, I was struck by the homogeneity of titles on the exhibit’s suggested reading list. The list isn’t bad by any means, but it places heavy emphasis on recent, teen-oriented titles such as The Antique Gift Shop, Chocolat, Click, Moon Boy, and Snow Drop while overlooking some less popular choices such as Buja’s Diary. As a supplement to my write-up of the “Korean Comics” show, therefore, I’ve compiled my own list of must-read manhwa. Though my goal is to direct readers to works in a variety of styles and genres, I freely admit that this list reflects my own tastes and biases. I’d love to hear from you about what you think belongs on a must-read manhwa list and why. And if you’d like a copy of the SFPL’s Korean Comics bibliography, let me know — I’d be happy to mail one to you. 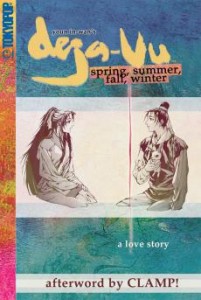 Déjà vu is a manhwa smorgasbord, pairing writer Youn In-Wan with six artists with distinctly different styles. The first four stories follow the same basic template: two lovers find themselves drawn together by mysterious forces, only to be separated by a moment of terrible violence. The settings and circumstances range from the vaguely folkloric — a warrior and a fox demon fall in love after he frees her from a hunter’s snare — to the contemporary — a blind Korean-American girl and an up-and-coming pop singer meet cute on the streets of San Francisco. The best stories, “Spring” and “Winter,” deftly interlace the fates of the warrior and the fox with the survivors of a twenty-third century apocalypse, bringing to mind Sun, the final installment of Osamu Tezuka’s Phoenix. Though the stories aren’t uniformly excellent, Deja-vu still makes a fine introduction to the contemporary Korean comics scene in general and the writing of Youn In-Wan in particular; look for his series March Story in October 2010. (Reviewed at PopCultureShock on 1/30/08.) 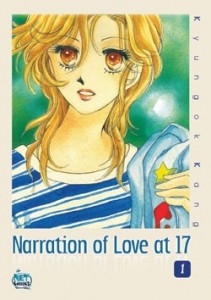 Seyoung, the heroine of Narration of Love at 17, is bright, but not exceptional; pretty, but not a head-turner; and talented, but not outstanding. For several years, Seyoung has been a member of the drama club, relegated to backstage roles while the beautiful Hyemi lands the plum parts. When Hyemi becomes involved with Hyunwoo, Seyoung’s friend and first crush, Seyoung faces a tough choice: will she wait for Hyunwoo to reciprocate her feelings, or will she move on? Backstage rivalries and first loves are standard manhwa fare, but Narration of Love at 17 proves deeper and more heartfelt than most coming-of-age stories in this vein, thanks to Kyongok Kang’s believable, appealing characters; their quicksilver moods, intense passions, deep insecurities, and ever-changing social allegiances make them seem like real teenagers and not an adult’s idea of what teenagers are like. Though the art is, at times, a little clumsy, Kang’s fondness for 1970s shojo is evident in her linework and character designs, and in her emotionally resilient protagonist. (Reviewed at PopCultureShock on 9/12/07. Click here to read a preview chapter at NETCOMICS.) 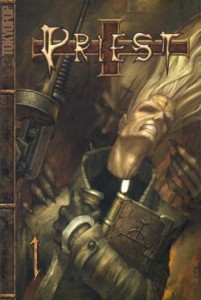 This sprawling, religio-horror epic comes saddled with enough convoluted backstory for a Tolkein novel, yet proves surprisingly fast-paced and fun. Skipping between the present, the Crusades, and the American West — or, more accurately, a manhwa artist’s cinematically influenced notion of the West — Priest tells the story of Ivan Isaacs, a man of the cloth who renounces his faith after evil researchers use his sister as a human sacrifice. Over the span of sixteen volumes, Ivan battles fallen angels and zombies in an effort to avenge Gena’s death, restore order, and redeem his sinner’s soul. The artwork is bold and stark, with spiky lines and attitude to spare; if you adored the over-the-top action sequences and pistol-packing clergymen of Hellsing, Min-woo Hyung’s elaborate shoot-em-up will be your cup of tea. (Click here to read the first volume at Tokyopop.) 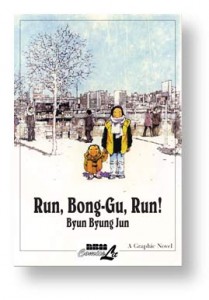 Run, Bong-Gu, Run! tells a simple story: Bong-Gu and his mother leave their rural village to find Bong-Gu’s father, who has gone to Seoul in search of work. As they retrace his steps through the capital, a chance encounter with a beggar yields an important clue to the father’s whereabouts, offering hope that the family will be reunited. The author never explicitly states what prompted the father to leave, how long he’s been away, or why Bong-Gu’s mother waited so long to track him down. In leaving these characters’ personal histories mysterious, Byun Byung-Jun comes dangerously close to romanticizing them: Bongu-Gu’s parents and the old beggar often register as poor but dignified archetypes rather than flesh-and-blood people. But Byun’s spare, restrained artwork mitigates against the story’s sentimentality, offering readers a haunting cityscape that’s as much a character as Bong-Gu or his mother. Rendered in rough, energetic brushstrokes and muted watercolors, Byun’s street scenes are among the most beautiful images I’ve seen in any manhwa translated for English-speaking audiences. (Reviewed at PopCultureShock on 7/11/07. Click here to read a preview at NBM/Comics Lit.) 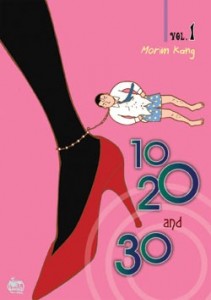 The ten, twenty, and thirty of the title refer to Rok, a sixteen-year-old girl; Belle, her twenty-six-year old cousin; and Krumb, Rok’s mother, who at age thirty-two finds herself a widow. Through a series of interlocking vignettes, 10, 20, and 30 documents the trio’s fumbling efforts to find themselves — and Mr. Right. If the naive, cartoonish art is a take-it-or-leave-it affair, Kang’s heroines are winning, at once complex and sympathetic. They make mistakes; they overreact; they misjudge the men in their lives; they sometimes hurt loved ones with selfish behavior. To be sure, similar characters abound in Bridget Jones’ Diary and Sex and the City, but there’s a qualitative difference between Bridget and the ladies of 10, 20, and 30: Rok, Belle, and Krumb aren’t neurotic. Beneath their quirks and anxieties, all three women display genuine strength and self-determination, even if they don’t always make smart choices about the men in their lives.  (Reviewed at PopCultureShock on 5/10/07. Click here to read a preview chapter at NETCOMICS.) 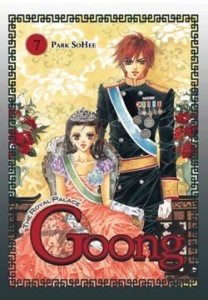 Goong: The Royal Palace focuses on commoner Chae-Kyung, a high school student who marries the next in line to the (fictional) Korean throne. Just as Diana Spence did in real life, Chae-Kyung discovers that being a princess isn’t glamorous, as her day-to-day life is filled with palace intrigue, onerous civic responsibilities, jealous classmates, and an indifferent husband who’s in love with someone else. Though the plot is an amalgam of familiar soap-opera conventions — romantic triangles! hot younger siblings! disapproving mother-in-laws! — the story has surprising depth, showing us the emotional toll that public life exacts on the young couple. Another plus is the artwork: it’s flat-out gorgeous, with considerable attention devoted to ancient ceremonial costumes and au-courant fashions. Pair those beautiful images with a compelling plot and boatloads of romantic tension, and you have a recipe for manhwa crack. (Reviewed at PopCultureShock on 8/29/08.) 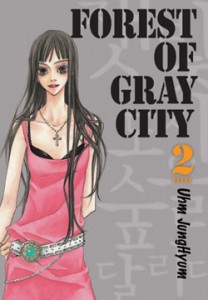 Struggling artist Yun-Ook and bartender Bum-Moo decide to room together after a series of drunken misunderstandings that wouldn’t be out of place in a Meg Ryan movie. Though Yun-Ook is horrified to discover their age difference — she’s in her twenties, he’s seventeen — Bum-Moo begins courting her anyway. The story would be pure Harlequin fodder if Jung-Hyun Uhm’s heroine wasn’t such a strong, appealing character. Yun-Ook is impetuous, insecure, and quick to take offense, but she’s also focused on her career, protective of Bum-Moo, and determined not to sacrifice her sense of self just to land a husband. There’s a level of emotional authenticity about her character that will resonate with female readers in their twenties and thirties, even if her story seems more firmly rooted in romance novel convention than reality. 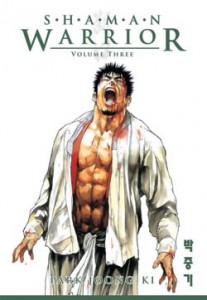 Shaman Warrior serves up generous portions of pow! splat! thmp! and gyaaaa! with heaping sides of political intrigue and supernatural hoo-ha. The story is, at heart, an inter-generational revenge fantasy about a young woman who spends her childhood preparing to confront her father’s assassin and lay bare the double-crosses and unsavory alliances that led to his demise — in short, it’s a grrrl power theme-and-variation on the Epigoni. What it lacks in complexity Shaman Warrior makes up in beauty and bravado: Park Joong-Ki is a superb draftsman, populating his story with an astonishing variety of faces and body-types. His fight scenes are artfully choreographed, if a little heavy on the speedlines, immersing readers in the action in the manner of a contemporary wuxia film. (Reviewed at PopCultureShock on 1/24/07. Click here to read a preview at Dark Horse.) 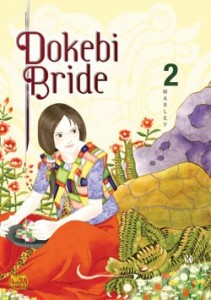 After losing her mother to mental illness and her grandmother to old age, Sunbi’s long-absent father returns to claim her. Their reunion proves an awkward and unhappy one, however: his new wife and daughter resent Sunbi’s presence, while Sunbi’s classmates shun her for her “freakish” behavior, none of them realizing that her aloof, abrasive demeanor helps protect her from demons and spirits. Familiar as Dokebi Bride‘s “I see demons!” premise may be, Marley uses Sunbi’s affliction as a jumping-off point for exploring issues such as fitting in, blending families, and answering that most basic of questions, who am I? Sunbi is an all-too-rare character in comics, a smart, resourceful girl who’s palpably — and justifiably, I might add — angry. Long after you’ve forgotten the basic storyline, the memory of Marley’s fierce, real heroine will stay with you. N.B. Dokebi Bride has been on hiatus for over a year; NETCOMICS has released the six volumes that were published in Korea. No word on when — or if — Dokebi Bride will resume. (Click here to read a preview chapter at NETCOMICS.) 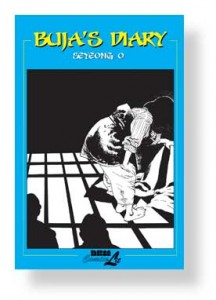 Among the manhwa featured in “Korean Comics: A Society Through Small Frames” was “The Picture Diary of Puja,” a short, poignant story about a rural family’s efforts to make a home in Seoul. “Puja’s Diary” (translated by NBM as “Buja’s Diary”) juxtaposes wordless scenes, illustrated in a naturalistic style, with a young girl’s description of the same events: a robbery, a shakedown, a child being injured at a construction site. The effect is simple yet devastating, a Dickensian critique of industrialization and poverty in modern-day Korea. As the other stories in Buja’s Diary attest, displacement, change, and encroaching urbanization are important themes in Seyoung O’s work, though he proves equally adept at humor (“Observe,” which tracks a vain gum-chewer through the streets of Seoul) and surrealism (“Escape,” which depicts one bored man’s nightmarish daydream about his office mates). The artwork varies according to the tone of the story; some of the more somber tales are rendered in charcoal wash and ink, while others employ more exaggerated linework reminiscent of Daumier. One of the most thought-provoking and beautiful manhwa available in English. (Click here to read a preview at NBM/Comics Lit.)